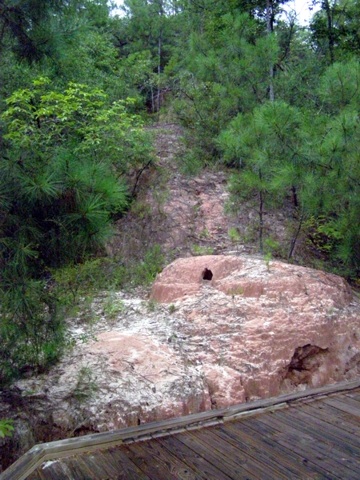 Through an improvement project done this summer at Bogue Chitto State Park, the popular Fricke’s Cave attraction has been cleared and returned to the appearance it had several decades ago.

Improvements to the gorge area, commonly known as Fricke’s Cave, were completed last week, Manager Kyle Bernese said. A contractor came out and cleared the brush in the main part of the gorge, an area consisting of a couple of acres.

“It’s opened up to where it looks very much like it did 30 years ago,” he said.

He said Fricke’s Cave is a main attraction at the park. Locals who used to visit the site years ago will now be able to recognize it as it was then, he said.

During the project, a crew of about 10 completed the clearing work essentially by hand, Bernese said. The contract stated that they were not allowed to bring any equipment into the gorge. He said many long hours and lots of hard work went into completing the project.

Work was also done at the park’s splash pad in late May, shortly before the attraction opened for the summer. Bernese said concrete was added to all the walkways around the splash park.

“It worked out really nice, and the public enjoys it,” he said.

A project currently under way is an upgrade to the park’s signage, in response to issues with and complaints about its directional signage, Bernese said. Working with the Washington Parish Communications District, the park has been able to place road name signs throughout the park. He said that project is in progress but is not quite complete at this time.

Additionally, more directional signage has been ordered that will let visitors know where certain attractions are located and will help them find their way around in the park, Bernese said.

“We’re currently working on that too,” he said.

Other work has been done in recent months, and, Bernese said, things are done every day to try to improve the state park.

After that came a road-paving project, completed in November. Previously, Bernese said, public complaints about dirt coming from the limestone were common.

“If you passed through the roads, there was a cloud of dust,” he said.

The Louisiana Office of State Parks purchased some road-paving equipment and completed the paving project at Bogue Chitto State and another recent one at Palmetto Island. Now, Bernese said, all of the local state park’s roads are paved with asphalt.

Bogue Chitto State Park, which has been open for less than three years, averages about 100,000 visitors per year, Bernese said. He hopes to see that number increase as awareness about the park grows throughout the local area. The park’s visitor numbers rank it about fifth or six among all the state parks, in terms of attendance, he said.

He said he would like for people to visit and then spread the word about the park, which also provides a boost to the local economy. He said people who come to the park ask about places to eat and shop, and park staff always sends them to Washington Parish businesses first.

Bernese said the park is currently “one of Louisiana’s best kept secrets.” The terrain is gorgeous, he said, and there is much for kids and families to do. The state park offers a canoeing and tubing service on the Bogue Chitto River and has cabins, campsites and other amenities, he said.

The state park has educational programming nearly every weekend, Bernese said. A calendar of events is available at www.crt. state.la.us/parks/icalendar.aspx. He said bigger events are also held on occasion, such as a recent, successful Fourth of July celebration. A fall festival is in the works too, he said.