After just one month on the job, new YMCA lifeguard jumps into action 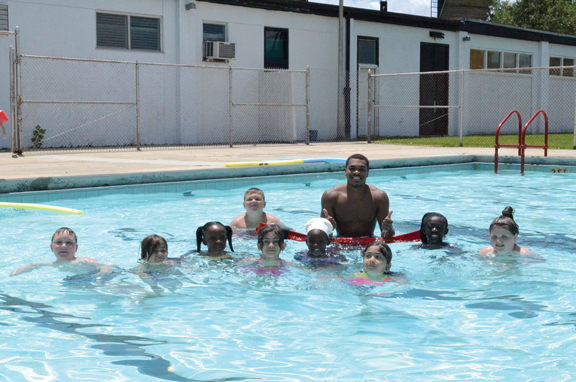 Recent Bogalusa High School graduate D.J. Pittman, 18, wasn’t sure he could swim the distance necessary to earn his lifeguard certification, but after he’d started the course at the YMCA, he was determined to see it through. Now both he and a certain young boy are very pleased that he persevered.

About a month after he earned the certification, Pittman put his newfound skills to work.

“I took the lifeguarding course through the YMCA, and every day we had to do eight laps,” he said. “A lap is there and back. It was hard for me and another dude. He quit. I didn’t.”

Pittman soon mastered the necessary skills, earned the certification and accepted a job at the Y.

It didn’t take long for him to put his lessons into action in what he describes as “an eye-opening” experience.

“It was a normal day,” Pittman said. “I was scanning the pool. We have to do that constantly. I saw six little kids swimming in the shallow end and scanned toward the deep end. Then I heard a scream that sounded like something was stuck, like water, and the person was choking or gagging. It caught my attention.

“I was sitting on the side of the pool having a conversation with a fellow lifeguard. After I heard the scream, I just clicked out of conversation mode and got into lifesaving mode. When I looked over it scared me somewhat. I saw the kid, he’s about 5 years old, and I could tell he was drowning.”

“I got up, grabbed my lifeguard tool, dove in so I wouldn’t splash and picked him up and walked him to the nearest exit on the shallow end,” he said. “I sat him on the side and tried to comfort him. You have to make sure they feel safe. He was still kind of in shock and wide-eyed. When he got back to his senses, he asked me what my name was. Then he said, ‘Thank you, D.J.’”

The significance of the event was not lost on the teenager.

A lifelong bond was made with an unforgettable memory.

Pittman does appreciate the depth of the experience. He said he also appreciates the Y for giving him the opportunity to take the lifeguarding course and then to use what he’d learned. He also is thankful that his mother, Susan Pittman, suggested he take the course.

“It ended up being more than I thought it would,” Pittman said.

Besides having a new little buddy, the young lifeguard has also gained some attention around the Y. When he walked into the area near the pool after the rescue, he found a sign of recognition created by summer camp participants.

“The Y camp kids made me a banner that says I’m a hero,” Pittman said, smiling. “I was surprised. When I saw it I said, ‘What is this?’ It made me feel really good.”