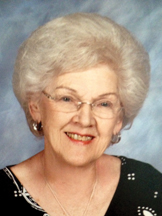 Charlene Clotilde “CC” Temples, took her eternal place in God’s heavenly choir on Wednesday, July 3, 2013, passing away in Plano, Texas, where she had been under the care of her two nieces for the past three years.

Born on Jan. 1, 1928, to James and Clara Wilson in Kentwood, Charlene grew up in Bogalusa and graduated from Varnado High School as valedictorian and was a recipient of the American Legion Award for scholastics. She obtained a B.A. degree in business education from Southeastern Louisiana University in 1949 and went on to teach typing at Bogalusa High School for 28 years. She earned a master’s degree in administration and supervision from Southeastern in 1975.

On July 25, 1949, she wed a local Navy boy and plumber, Clinton Temples, on the front steps of her parents’ home. Clinton and Charlene were together for 52 years and spent their happiest years managing Clinton’s off-the-wall “projects” on their property in Bogalusa. They especially enjoyed entertaining friends and family at their well-plumbed fishing camp on the Pearl River.

Charlene was a devoted member of Superior Avenue Baptist Church for nearly 60 years where she taught Sunday school and was a member of the church choir. In addition to her hobbies of crocheting and cross-stitch, she was an active member of the Delta Kappa Gamma Teachers Society and the Bogalusa Chapter of the Louisiana Retired Teachers’ Association.

She is survived by her brother, James Wesley Wilson (m. Irene Janie Cothern) of Kingwood, Texas; her nieces, Janet Irene (Wilson) Balekian of Flower Mound, Texas and Gaile Jean (Wilson) Gertson of Garland, Texas; a sister-in-law, Gladys (Temples) Bankston of Zachery; and 20 other nephews and nieces of the Temples family, and the countless men and women whom she touched as a friend, teacher and role model.

The family wishes to thank Virginia Carroll for her care and support of Charlene for many years.

Charlene was preceded in death by her husband, Clinton Oscar Temples, and her parents, James Easley and Clara (Alford) Wilson.

Visitation will be held on Saturday, July 6, at Poole-Ritchie Funeral Home from 5-9 p.m., and will continue on Sunday from 9 a.m. until time for the funeral service at 2 p.m. in the funeral home chapel, with the Rev. Clay Norwood officiating. Interment will follow at Ponemah Cemetery.