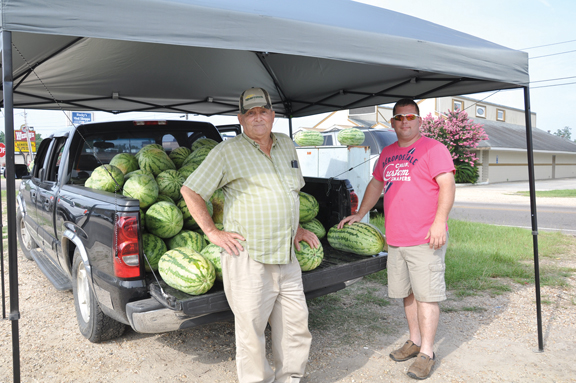 While the Washington Parish watermelon crop got off to a late start this year due to cold, wet conditions in the spring, the harvest has arrived just in time for the Fourth of July.

Scotty May, assistant extension agent (ANR) at the parish LSU AgCenter Extension Service Office, said watermelons are sometimes ready for harvesting as early as late May,but typically arrive by early June. This year,growers were not able to pull melons out of the field until late June.

The fact that cool temperatures were seen as late as April this year was a big factor in the delayed melon crop, May said. Some growers had to replant a couple of times after their melons were damaged by the cold.

Persistently moist conditions and numerous rain events throughout the winter and spring months also contributed to the crop being late, May said.

Despite the delay, overall fruit quality and fruit set in the melons produced has been good this year, May said.

Washington Parish is known for its watermelons, and May said the soil type is the reason they grow so well in the area. The parish’s sandy-type soil is perfect for growing watermelons. The soil allows for better drainage than heavier clay-type soils, with which are more likely to experience disease issues, he said.

Many parish growers produce cantaloupes in addition to watermelons, May said.

“They do well in that soil type,” he said.

The biggest market for watermelons is around the Fourth of July. Watermelon fans will be able to enjoy them throughout the summer, however. May said good quality melons should be in production through August since the season was late on the front end. The season typically ends in late July or early August.

May said many growers stage their production by planting their melons a little at a time, planning it so that they will have a continuous supply of watermelons for a couple of months. This prevents the growers from having to flood the market at all at once and then run out of product, he said.

Like any crop, production of watermelons is volatile, May said. In a given year growers have to contend with weather and things like disease pressure, insect pressure and droughts.

“Every year there is something different we have to work with, and this year it’s been the cool and wet weather we’ve had early in the season,” he said.

To give an idea of how many producers there are in the parish, May said the Washington Parish Vegetable Growers Association has about 90 members, most of them watermelon growers. He said they are located all across the parish, and their farms range in size from a home garden producing enough melons for one family to 25-30 acre farms.

One of those large fields is the Bond watermelon farm in Stoney Point. Todd Bond and his dad, Gary, are partners in the farm, where melons have been grown for more than 40 years. The first-generation grower in the family was Wilfred Bond, Gary’s father.

Todd’s wife, Stacy, said customers line up daily, beginning at about 6 a.m. Some get just a few melons, but most bring their own trailer and get hundreds to sell. She said the landline phone the family keeps just for watermelon time rings nonstop, and so do their cellphones.

She said her husband and father-in-law work hard at the farm, “and it is not an easy job, being as hot as it is out there.”

May said producers sometimes grow five or six different varieties, since the types have different maturity rates and the production period varies. He said popular varieties, in addition to starbrite and summer flavor 720, include big stripe and legacy.

The traditional watermelon in Washington Parish — and a variety still grown by some people — is jubilee, May said.

Much of the production today is in starbrite, which holds well after harvesting, May said. The newer hybrids, he said, are more productive and resemble jubilee in many ways.

Places to go, and things to see