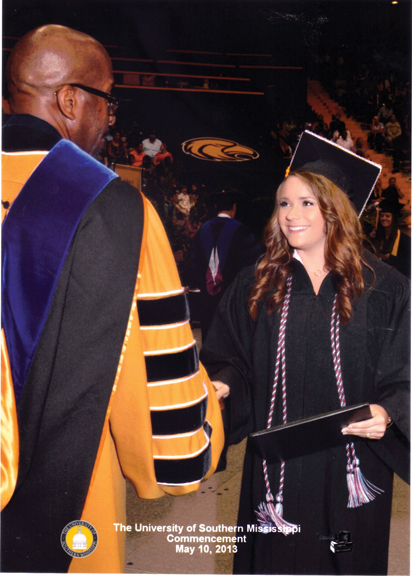 Caroline Knight of Bogalusa graduated from the University of Southern Mississippi on May 10 at the spring commencement exercises held at the Bernard Reed Green Coliseum, with Mississippi Gov. Phil Bryant as the speaker. She was one of more than 1,800 degree candidates, graduating with a Bachelors of Arts Degree in Speech/Language Pathology.

While at USM she was a member of Pi Beta Phi Sorority, where she held many positions in the chapter and enjoyed working on the sorority’s philanthropic endeavor, literacy. She was also a member of Gamma Rho Chi as a Greek Recruitment Counselor and held a leadership position with the College Panhellenic Council.

Knight currently is enrolled at Southeastern Louisiana University will she will begin working toward her Master’s Degree in Speech/Language Pathology. She plans to return to her hometown and work with geriatric patients.