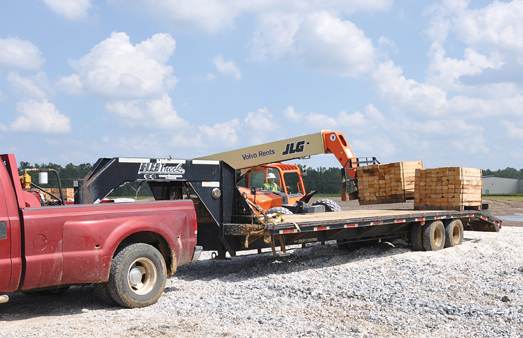 As construction continues on the Parkway Pipeline project, Bogalusa will be a hub of activity.

Parkway Pipeline is a joint venture between Kinder Morgan, its parent company, and Valero to run a 141-mile pipeline from existing refineries in Norco to an existing facility in Collins, Miss.

Lou-Tex is the contractor building the pipeline.

The contractor has a one-year lease, which began May 1, for an office and equipment yard in the Bogalusa Industrial Park.

Allen Fore, director of Public Affairs for Kinder Morgan, said the site serves as a staging area for crews working throughout Louisiana and some Mississippi crews to gather prior to construction.

The workers will go to that facility each morning for any necessary training and to get their assignments for the day before heading out to the worksite.

The building also has office space for various personnel.

A couple hundred workers will be in and out of the office on a regular basis, creating a short-term benefit to the area through workers patronizing local businesses, buying meals, staying in hotels and renting property, Fore said.

Already, site preparation work is under way around the area.

Mayor Charles Mizell said he is happy to have those workers in the city.

“They’re buying some fuel,” he said. “They’re eating in our restaurants and shopping in our stores. Any time we have new people in our city it gives us an opportunity to showcase our Bogalusa.”

It would be difficult at this point to judge the impact the project will potentially have on Bogalusa’s economy, since it is the first time one has come through under Mizell’s administration.

But he said the sales tax revenue for this month should provide an indicator “of the importance of Lou-Tex and some of the other activities here.”

Hiring was done through Lou-Tex, and Fore said a combination of local workers and those who came in with the company are working on the project. Unlike some other states, Louisiana has many workers who already have pipeline experience and “can potentially do work on the project close to home,” he said. The jobs will last through about September or October.

Running through the parish near Bogalusa will be 24.46 miles of pipe.

Fore said that will create a longterm economic benefit for the parish through property taxes. The company will be paying an estimated $963,000 a year in taxes on the property. The annual assessment could vary, “but it will be significant for many, many years,” he said.

In Washington Parish and Louisiana in general, the pipeline construction process is under way, Fore said. While some of the clearing and grading of the right of way remains, he said most of that portion of the project has been completed.

Fore said the project is going well and is on schedule. It is anticipated the pipeline will be in service by Sept. 1.

“In service means that gas will be flowing in the line,” he said. “There still will be things that are happening after gas is flowing.

“We need to make sure the property is restored. We’ll have some additional cleanup activities and other items similar to that, but the major impact and the major visible construction activities will be completed by then.”