Poplas Street Bridge set to reopen in a few weeks 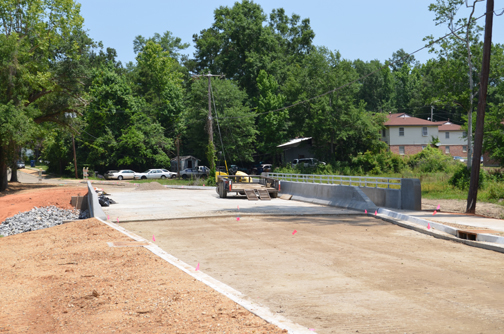 Residents of the Poplas Quarters neighborhood should have a more direct route through Bogalusa again before the end of June, according to Public Works Director James Hall.

The Poplas Street Bridge, which has been down for replacement since late 2012, is getting close to completion and is expected to re-open within the next two or three weeks, Hall said Friday.

The bridge is one of 10 in Bogalusa that are part of the Washington Parish allotment for the federal Off Road Bridge System project.

“We already did the one on Austin Street and then the one on Claiborne Street,” Hall said.

“This is the third one in Bogalusa.

“We have to do the maintenance and inspections, and the state actually builds the bridges.”

Besides clearing rights-of-way and handling other property issues, the city had to relocate a 10-inch water main, a 12-inch sewer force main and an 8-inch gravity fed sewer main for the Poplas project.

The bridge replacement was expected to take eight months but might be done a couple of weeks early.