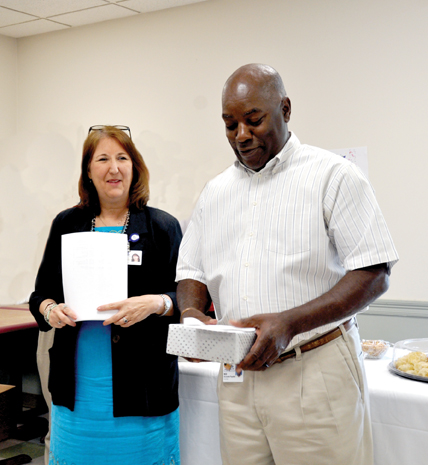 Riverside Medical Center in Franklinton took the opportunity during National Hospital Week to recognize its long-serving employees and present the Nurse of the Year and Team Member of the Year awards.

The Service Awards reception was held May 13 in the hospital cafeteria. Interim CEO Patty Mizell said the awards are usually presented during Christmastime, but the hospital decided to change things up this year and make the ceremony the leadoff to Hospital Week, May 12-18.

Other National Hospital Week activities at Riverside included a pancake breakfast on Tuesday, a picnic on Wednesday, an ice cream social on Thursday and a special drawing for employees on Friday.

The nurse excellence award was presented by Chief Nursing Officer Ben Lott, who began by thanking the hospital staff and all who attended the reception.

“We are a family,” he said. “This has been a very difficult year, I think everybody will agree. But we have worked hard together and we have preserved. We’ve made this a good place to work.”

He said the nursing supervisors come together as a group each year to choose the award recipient. Leading up to the big reveal of Cathy Magee as Nurse of the Year, he said that this year’s honoree exhibits clinical skills, professionalism, dependability and a good attitude.

“She’s a caring and compassionate nurse — respectful and respected, honest and dedicated — and she carries the burden of many,” he said. “She’s willing to help others and picks up extra shifts when needed. She remains calm in most any situation, and she is valued for her knowledge and for her skills.”

Magee’s recognition came with a $300 check. She will also have her pictured displayed in the main lobby for one year and will have a special parking space for the year.

Magee was shocked to receive the award, but it means a lot, she said. She has been a Riverside employee for 14 years and enjoys working at the hospital.

“It’s close to home and it’s family,” she said.

Next up was the Team Member of the Year recognition. Employees provide nominations for the award, and the administrative team makes the final selection. Mizell said this year’s honoree is dependable, reliable and conscientious about his job. She said he is courteous to staff and visitors and is always friendly and pleasant.

Mizell gave the identity away to the honoree, Will Magee, and to the attendees when she said, “He handles a lot of paper during the year. We have over 2,007 vendors that we pay annually.” She said Magee has a great deal of responsibility through his job in the accounting department.

Magee, who also received his 10-year pin during the reception, said it was a shock to be named Team Member of the Year. He will receive the same award package as Magee.

In closing, Mizell said she appreciates everything the employees do. She said there have been hard times and good times at the hospital this year, and better times are on the way.

“We’re going to move forward and have a positive year,” she said.