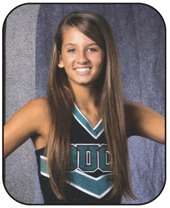 Three local high school senior females are each receiving $500 scholarships to be applied to their college expenses. For the eighth year,

the local Beta Rho Chapter of Delta Kappa Gamma International is issuing these scholarships to young ladies who plan to become teachers. The organization is pleased to support and encourage these future educators with this financial gift and award.

The first recipient is Morgan Boone of Bowling Green School. She is

the daughter of Robert and Jackie Boone of the Angie community. She has attended Bowling Green since she was a small child, and has been very active in every aspect of the school program. In high school, she has been an officer on Student Council, BETA Club and Fellowship of Christian Athletes, as well as having served as the senior class secretary. She was chosen as Miss BGS this year and was elected by her peers to be a member of the Homecoming Court.

As a BGS cheerleader, she was also involved in teaching children in the annual mini-cheerleading camps. Dancing and gymnastics have been a part of her life for many years. She also has an excellent academic record. She comes from a family of educators, and she has always had “a passion for working with and teaching younger children.”

She has known for a long time that she wants to be an elementary teacher. She says that making a difference in just one child’s life will be worth every bit of hard work. Boone plans to attend Southeastern Louisiana University in the fall. She recently has been selected to be an SLU Lionette Dancing Team member. She will make a great teacher some day.

A second recipient of the $500 scholarship is Emily Hartzog of Franklinton High. She is the daughter of Gilbert and Charlyn Hartzog of the Angie community. She graduates with a 4.0 GPA.

Hartzog has been greatly influenced by her educator father, an agriculture teacher at FHS. Their experiences in the Future Farmers of America Organization have inspired her to set a positive, Christian example for her students, to share her agricultural knowledge and to inspire her students to pursue education beyond high school.

During her years at FHS she has had a very active career in the FFA, and has been recognized in areas such as public speaking, parliamentary procedure, forestry, horticulture and leadership.

Her academic achievements are many. She also is devoted to her church, and has led in many areas there. This fall she plans to attend Louisiana Tech University and major in secondary agriculture education.

Beta Rho Chapter is proud to present the scholarship to Emily, who will make an outstanding teacher one day.

A third recipient of the $500 scholarship is Hannah Reeves, also of Franklinton High. Hannah is the daughter of Jake and Cheryl Reeves of Franklinton. Even as a child, she liked to play “school” so she has always known she wanted to be an educator. Recently, she has worked at a local after-care center, tutoring children in several academic areas; this has further confirmed her desire to teach.

At Hillcrest Baptist Church she has led several Bible studies and work with children. During her high school career, she has excelled in academics. She graduates from FHS with nine hours of college credit, and has outstanding achievement on GEE testing and ACT testing. Her favorite subject in school has been history, and she recalls one of her most memorable days in high school as the day she taught about the Holocaust to several classes as part of her senior project. She plans to attend Southeastern Louisiana University in the fall and major in secondary education so that she can be a history teacher one day. Congratulations to Hannah, a very deserving young lady.

One goal of Delta Kappa Gamma International is to support and promote future teachers. Good teachers and a superior education are important keys to the future of our children and our nation. Outstanding local teachers who are members of the Beta Rho Chapter are proud of these three senior girls who have been chosen. We wish them success in their college careers as they prepare to be future educators.