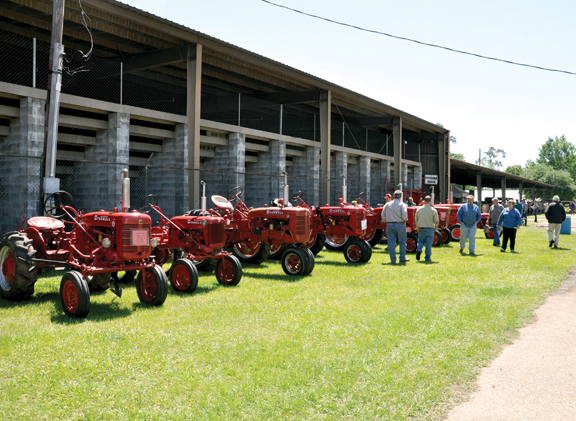 A cool, sunny day and the opening of Mile Branch helped attract a large crowd to the Washington Parish Fairgrounds on Saturday, May 4, for the Antique Tractor, Engine and Truck State Show.

The two-day event kicked off on a rainy, dreary, not-so-well-attended Friday, but International Harvester Collectors, Louisiana Chapter 31 President Buddy Banks said the next day was a complete turnaround.

Banks said about 75 tractors were shown, 25-30 of them hit-and-miss engines. Though it was an IH gathering, he said other makes were welcome, and tractors on display also included John Deere, Ford, Massey Ferguson and Minneapolis Moline models.

Tractor parts were available for sale or trade as part of a swap meet, and Banks said there was a good turnout of arts and crafts vendors.

Games such as a kids’ tractor pull and a skillet throw took place, and awards were handed out in various categories.

Homer Ferrell of Columbia, Miss. was recognized for having the most engines with 10 inches, and Lisa Pierre of Folsom got an award for most usual display. Conrad and Jerry Bell of Danville, Ala. traveled the longest distance to display, and Wesley Williamson from Loranger showed the oldest tractor, a model from 1927.

Jane Roberts, a member of Alabama IHC Chapter 23, said she comes out to the fairgrounds each year for the Louisiana show. The event provides a boost to the Washington Parish economy, with local hotels nearly booked up, she said. There were many out-of-state visitors, 30 from the Alabama contingent alone, she said.

“We’re going to the restaurants and eating meals,” she said. “It’s bringing in additional revenue.”

Roberts, who has attended the annual event each of its 11 years, said it is good family entertainment.

She and others make a vacation of it and spend additional days visiting local establishments and other Louisiana attractions too, she said.

“The tractor show lures us here, but as a result we go and see all these other places and things that we wouldn’t normally come to see if hadn’t been for the tractor show,” she said.

Roberts said it was nice to see Mile Branch Settlement open for the first time in the history of the tractor show and that it brought new people to the event.

A steady stream of people toured through the settlement’s cabins and stopped by Bankston General Store to purchase some of the ever-popular hoop cheese.

Banks, who has been fixing, restoring and using old tractors for about 30 years and has been ICH 31 president for the 11 years the organization has been in existence, said the show is attended by tractor enthusiasts from far and wide.

“It’s kind of like a big family reunion,” he said. “We go all over the country. We go to their shows and they come to our shows.”

“You can bring your grandma or your little baby. You don’t have to worry about anybody getting out of line. It’s just a good group of people.”