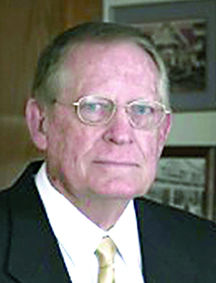 Lou Major Sr., whose journalism career with The Daily News and its parent company Wick Communications spanned six decades, died Tuesday, May 6, 2013. Major, a native of New Orleans who resided in Bogalusa for 55 years, had resided in Slidell since 2006. He was 82 years old when he succumbed after battling lymphoma for several years.

Born in Meridian, Miss., he was raised in New Orleans and Jefferson Parish. He attended Tulane University for two years and was a journalism graduate from LSU.

He began in career with Wick Communications in 1951 as a reporter and through the years wore many hats, including editor, general manger and publisher of The Daily News, and executive vice president, president and CEO of the Arizona-based company. In 2012, when his term on the Wick Board of Directors ended, he had worked with Wick Communications at local and corporate level for 60 years.

He was active in the Mill Town Players, served as president of Bogalusa Community Concerts and was on the boards of the United Way, the Red Cross, and the Salvation Army, and was a member of the Bogalusa Rotary Club.

He is survived by his wife of 63 years, Blanche “Peggy” Ripp Major of Slidell; three sons, Lou Major Jr. of Stafford, Va., Steven Major and wife Renee of Cleveland, Ga. and Jason Major and wife Deanna of Singapore; a daughter, Christie Major Hall and husband Rick of Covington; six grandchildren and eight great-grandchildren.

He was preceded in death by his parents, A.J. Major Sr. of New Roads and Bertha Lawrence Major or Laurel, Miss.; his brother, A.J. Major Jr.; and his sister, Delores Major Harmeyer.

In accordance with his wishes, a private family service will be held.