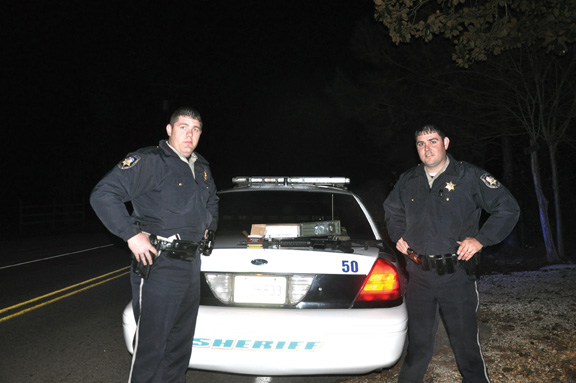 Friday night was already set to be a busy one for the Bogalusa Police Department and Washington Parish Sheriff’s Office, as the agencies had teamed up to conduct two sobriety checkpoints in the city. But before the first checkpoint had even concluded, the WPSO made a gun arrest at a separate location.

The group assembled at the Avenue B and 9th Street checkpoint, which included Sheriff Randy Seal, WPSO Chief Deputy Mike Haley and BPD Chief Joe Culpepper, heard several bursts that seemed to have been made by an automatic weapon.

“Shortly after that, one of the deputies called in from the (Louisiana) Highway 60 area stating that bullets were flying by him and asking for assistance,” Haley said. “Several sheriff’s office units and Bogalusa Police Department units responded.”

The officers, with Haley and Seal among them, responded at a residence located off Highway 60, near the intersection with Louisiana Highway 439.

“Some subjects were discharging weapons at random into the woods,” Haley said. “One of the deputies was flagged down by neighbors who were concerned about the gunfire going on and the danger to their family.”

“The sheriff’s office will not tolerate such reckless behavior that endangers the citizens of Washington Parish,” Seal added. “Any time incidents like this occur, we’re going to respond quickly and take whatever action is necessary.”