Some thankful to begin the hunt for presents 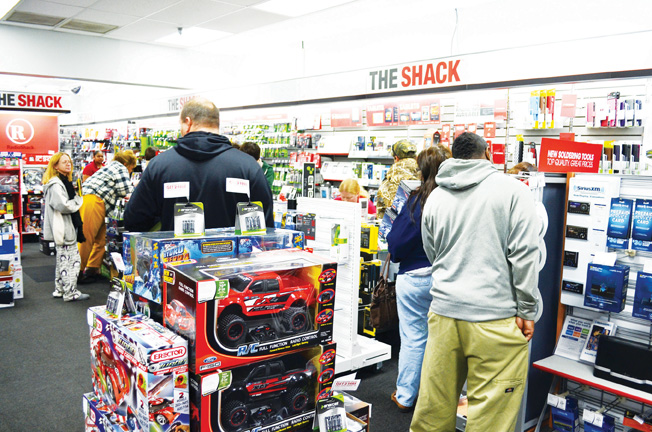 While most of the local “mom and pop” stores kept to family traditions of closing shop and gathering for a big meal with maybe a trip out later to see the Parade of Lights and/or Christmas in the Park in Bogalusa, Thanksgiving ended on a more energetic note for some places of business and their shoppers this year.

Like others across the country, some stores, most of them national chains, took a stab at beating the competition for Black Friday crowds by opening their doors when it was still Thursday.

The Stage store in Bogalusa opened at 8 p.m. on Thanksgiving.

“It was awesome,” said Linda Reed, manager. “I’ve been doing retail for 15 years now, and we need to give everybody a big thanks. People were just so friendly.

“When I got here at 7 o’clock, the line stretched from my front door to Walmart, and the parking lot was full. My associates had to park across the street.”

Reed, who had to make sure every customer got a gift card and to coordinate purchases of “a tablet everybody wanted,” advised the crowd that she was going to open only one of the store’s two doors.

“There was no fussing, no complaining,” she said.

“The store was jam-packed. You couldn’t even move. At 11 o’clock I finally saw the walls. And you know how many complaints I got? One. A lady said we should have had more of an item, but the ad said ‘while supplies last.’ People were laughing and enjoying each other. It was one of the best years.

“Everybody was in a good mood. They had full bellies, the weather was beautiful and we had good buys. The people were just grand.”

Reed said she heard some people saying they wouldn’t be able to shop on Black Friday because they had to work.

But although “Grey Thursday” proved highly successful, the early opening might have simply spread out the early shoppers, rather than encouraging additions.

“The problem is, today is slow,” Reed said on Friday.

Down the strip, a Walmart employee rolled out of the store with a full basket and a smile on her face. She said she’d worked from 6 p.m. Thursday through 6 a.m. Friday, and that although “it was crazy, it was fun.”

By comparison, before 6:30 a.m., Walmart was also quiet. Whether or not that was just a lull while the next throng of eager shoppers assembled remained to be seen.