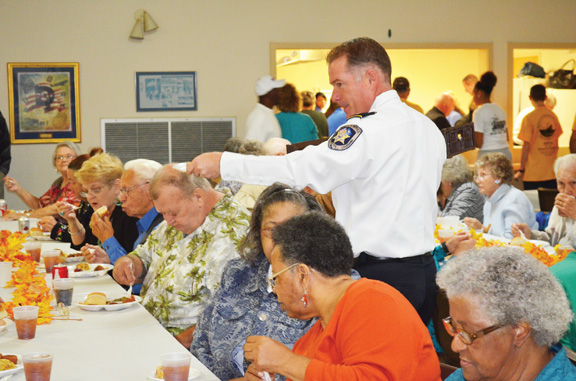 The Washington Parish Sheriff’s Office traditionally hosts two holiday dinners, one in Bogalusa and the other in Franklinton, for local senior citizens just before Thanksgiving. This year, the first was held in Bogalusa on Monday at the American Legion Home and the place was packed.

An estimated more than 500 people were treated to a dinner of turkey and the trimmings, live gospel music, chances to win lots of door prizes, and gift bags full of goodies.

Chief Deputy Mike Haley started off the event with a prayer of thanksgiving, and Sheriff Randy Seal later took the stage to welcome everyone, give special recognition to those in attendance who had served in WWII, and to further share his gratitude.

As servers bustled with smiles on their faces, longtime friends and neighbors and newcomers alike shared the community holiday spirit.

Marsha Hunt Adams of Camellia Home Health and Hospice was serving food as a volunteer. After she’d gotten her breath, she praised the event.

“To me it was the best fellowship and the most people and the best food I have seen in many, many years,” Adams smiled.

Bill Woodward was among those being served. He said he was grateful to the WPSO and everyone else who helped treat the elders of the community.

“It did attract some people we haven’t seen in a while,” Woodward said. “It’s one time of year we get to see everybody. And the school kids did a great job. We appreciate them all.”