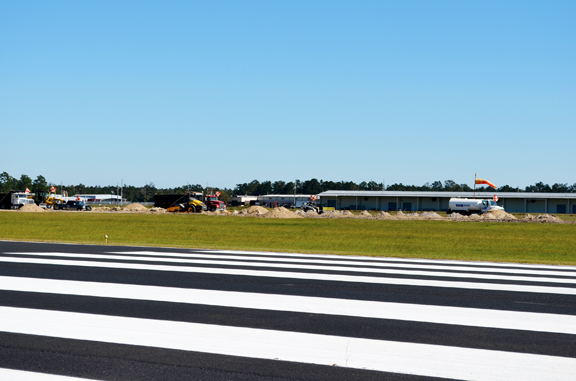 George R. Carr Memorial Airport is undergoing a transformation, and it’s just one of many changes-in-process designed to upgrade the city of Bogalusa as a whole in order to stimulate economic development and improve the quality of life.

Mayor Charles Mizell said it’s important to get things moving, and that some components of the overall improvement project will take a while to show progress while others will be evident shortly after they are set in motion.

The airport is something of both.

Anyone who has not visited the facility in recent months would be surprised to see the west-side fence gone and large equipment working piles of rubble into a compacted surface along a strip that parallels the runway.

Construction of a parallel taxiway has begun, and Louis Busby, assistant airport manager, said Phase I of the three-phase project should be finished before the end of this year.

“They hope to complete it soon, before Christmas,” he said. “They have tested, scraped and are laying crushed concrete now. They hope to pour asphalt soon.

“They got lucky. They only had one rain day, the Tuesday before the fair, and it only rained for about 45 minutes.”

Phase I covers 1,000 feet with a crossover to the existing runway, Busby said.

“Phase II is a little longer,” he said. “We’ll do it when we get the funding. Phase III will go to the end.”

The runway is 5,002 feet long, and the project includes three crossovers.

“We’re hoping for state and federal funding,” Busby said. “We’re meeting with them.

“I think there are 63 airports in Louisiana. You have to tell the DOTD (Department of Transportation and Development) your plans when you get them set. They determine which plans they are going to fund and for how much.”

The George R. Carr Memorial plans are in-hand, and in October the Bogalusa City Council approved a resolution that enables continued development and asks the state DOTD Division of Aviation to fund the improvements.

Additionally, Mizell said that Busby and Airport Manager Farley Grantham attended a convention of the Federal Aviation Administration, an agency of the United States Department of Transportation, in Texas last week, and that they could possibly return home with news.

In the mean time, the mayor said he is “excited about the airport.”

“Phase I is so important,” he said. “It allows planes to land and immediately get off the runway for others.”

Mizell believes the parallel taxiway will improve safety and efficiency, and, ultimately, the bottom line in Bogalusa.

He calls the airport improvement project “one of the building blocks” for the overall “Building a Better Bogalusa” project, and he alluded to the long-promised Louisiana Highway 3241, which would be a commerce conduit through St. Tammany Parish and beyond.

“This is our 3241 at this time,” Mizell said. “It’s an important part of a long-range program designed to grow with the economy in the city by first stabilizing where it was and investing and improving for the future while attracting more visitors to our city.”

Already, contractors for Walmart, representatives for Kinder Morgan which Mizell calls “the contractor of choice for the pipeline,” and International Paper regularly use the George R. Carr Memorial Airport

“Business people fly in and out of this airport,” Mizell said. “I think, in a lot of cases, this is our first chance for a good impression. Most investors today, I feel, first read a webpage and, if they’re interested, fly in.

“I think it’s a different world, and we must have a changing economy and continue to move forward our city. We’ve got to be innovative. We can’t be following. While we repair the past — the sewers and streets — we are going to be aggressive.”

It’s just one of many strategic development projects now in process in Bogalusa.

While Mizell has a background in construction, he’s also excited about something besides the parallel taxiway and future new hangars at the airport.

“We’re starting a flight school again,” he said. “It’s Fly by Knight. Sharon Knight is the owner and an instructor.”

New business is already moving in.