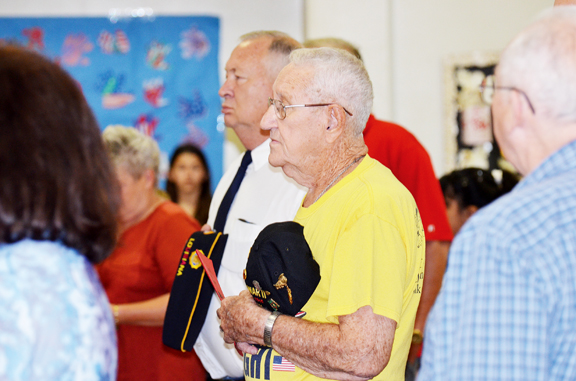 Former and current members of the United States military were recognized and honored by the students, staff and family members of Annunciation Catholic School in Bogalusa Friday, just a few days in advance of the national day of celebration on Nov. 11.

Father Pat Collum started off the annual ACS Veteran’s Day Program with a prayer of thanksgiving and appreciation for all members of the armed forces, while local representatives of the various branches sat solemnly amidst the assembly with occasional smiles for the young students who sang and spoke in tribute.

Taylor, a teacher who joined the National Guard while in his 30s, spoke of his deployment to Afghanistan and his work with a vertical construction company while in that country.

He described to the students a job unlike what they might imagine while playing soldier, but which was a vital component of the overall effort.

Finally, Taylor pointed out that as a soldier he was away from his wife and child for more than a year. He asked the students to think about that sacrifice by the members of the military and their families.

That is on top of the sacrifice of risking their lives, but Taylor said that nothing makes him more proud than his military service.

“To me as a soldier, there is nothing more important than having the opportunity to serve your country,” he said.