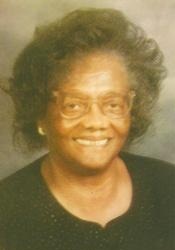 She was born April 24, 1929 to the late Monroe and Jo Anna May in Tylertown, Miss. She was a faithful member of St. John Temple COGIC, Bogalusa, under the leadership of the late Bishop John W. White. At she served as president of the Pastor’s Aide Board, a member of the Sewing Circle, the Home and Foreign Mission, hospitality and choir.

Later in life, she met and married Elder Edward A. Smith.

After moving to Tampa in 1989, she served as a mother of Full Gospel COGIC. Later she became a member of College Hill COGIC. She was a virtuous woman. She always put God first and taught her family to do the same.

She was preceded in death by her parents; her husband, Elder A. Smith; two brothers, Curtis May and Terry May Sr.; two sisters, Vergie Lee Robinson and Ernestine (Monia) Ball; two stepsons, Edward Smith Jr. and John Miller; and one grandson, Jabus Fields.