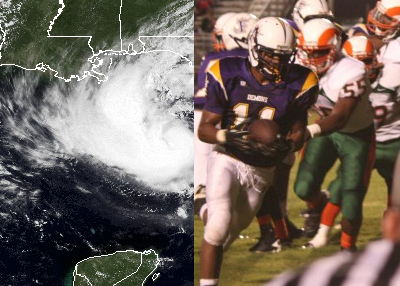 At least five prep football games scheduled for Friday have either been postponed or canceled.

This week is the first regular season game for all of the team.

Bogalusa’s home game against Kentwood may be rescheduled for Saturday or Sunday, according to coach Craig Jones.  Jones said there is a possibility the game will be canceled.

Varnado’s home game against Northlake Christian has been tentatively rescheduled for Saturday at 7 p.m., according to coach Scott Shaffett.

Franklinton’s much anticipated matchup against John Curtis has been postponed but Demons coach Shane Smith said he has been unable to make contact with Patriots coach J.T. Curtis. Smith is hoping the game can be played either Saturday or Sunday.

Ben’s Ford’s road game against Porter’s Chapel has been rescheduled for Sept. 28.

Mt. Hermon coach Henry Crawford could not be reached. The Yellow Jackets were scheduled to host Springfield.