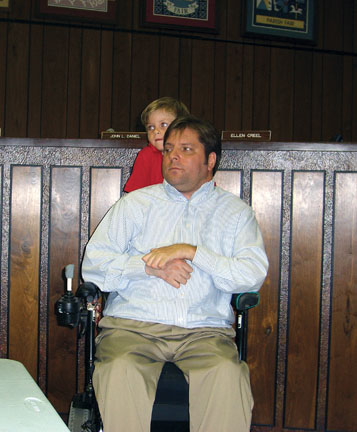 A time of reflection on his past achievements, his character and the impact he hopes to make on his community through his work as chairman of Recreation District 1, Franklinton/West Washington Parish Citizen of the Year 2011 Johnnie Daniel was honored during a reception held Sunday at Franklinton City Hall.

Betty Gill, who was the 2009 winner, kicked off the day’s program by recognizing both her fellow past recipients of the Citizen of the Year honor and the special guests in attendance. The 2010 Citizen of the Year and the vice chairman of Recreation District 1, master of ceremonies Dennie Fowler then read his nomination of Daniel for the award.

Giving the first of several testimonials was Rick Wood, who was baseball coach to then-12-year-old Daniel more than 30 years ago. Wood recognized him Sunday for his achievement as “MVC,” or “Most Valuable Citizen.” Wood discussed receiving the phone call in 1983, when he learned about the baseball accident that left Daniel paralyzed from the chest down, and the “tough days” that followed. While some people quit when faced with trouble, Wood said, others follow the tenet from a speech once given by Winston Churchill: “Never give up.”

“That’s what this guy does,” Wood said. “He just keeps on going. He’s like the Energizer bunny or something. I am thankful that he invited me to be here today. I am so proud of him.”

Rev. Paul Watts spoke about the experience of serving as Daniel’s pastor at First Baptist Church of Franklinton. Throughout his years in Franklinton, Watts said, he would see Daniel at almost every football or baseball game he went to, always visiting with members of the community.

In offering several years ago to maintain the First Baptist website, free of charge, Daniel was saying “he wanted to be a part of what God was doing through our church,” in addition to the other ways he is “serving the Lord in his community,” Watts said. Any time there is any kind of glitch with the site, Daniel quickly starts working on trying to fix it, Watts said.

“It’s that attention to detail, and it’s that motivation to strive for excellence, just being a good steward,” he said. “You know what a steward is? A steward is someone who’s been entrusted with something and uses it knowing that it doesn’t really belong to them.

“Many people might say, ‘Well, Johnnie doesn’t have a whole lot.’ Oh, there’s a lot of grace that’s been given to Johnnie, and he’s using what God has given to him for the glory of God, for the good of this community.”

Sharing some humorous stories about Daniel’s experiences playing pee-wee football, junior high basketball — where he was his coach — and high school sports, where Daniel was a starter on all of the teams, was Dennis Crowe. Since participating in athletics teaches one how to get back up after being knocked down, Crowe said he thinks “God was preparing him for something right there.” Daniel, Crowe said, displays the qualities that he says sum up a successful person: adaptability, commitment, decisiveness and teamwork.

“Each person basically has a choice as to whether we’re going to be someone who is an encourager or someone who is a discourager. Simple as that,” he said. “We can either figure out how we can do something or we can come up with 10 reasons why you can’t do something.

“And I think Johnnie, by his words and by his actions, has truly been someone who is an encourager, and I know he’s been an encourager to me.”

Crowe concluded by thanking Daniel for all the things that he’s done.

“You truly are a good example to all of us, and we appreciate you,” he said.

Next, Richard Meek presented Daniel with the Distinguished Service Award and a gift from The Daily News, and Franklinton Mayor Wayne Fleming presented him with a certificate of commendation, a lapel pin and a key to the city.

After a little bit of teasing about Daniel’s “selective hearing” and how he was prepared to give a 45-minute speech rather than one that would be four to five minutes long, Fowler turned the mic over to Daniel for his acceptance remarks.

“It’s just very humbling to be here and to receive this honor,” Daniel said. “There are many qualified citizens for this in Washington Parish, and I was totally shocked when I learned that I was chosen. I join a group — you can look in your program and see — a group of people that have done many positive things for our community. I don’t see myself as at their status yet, but I certainly want to thank the committee of previous winners for choosing me.

Daniel spoke about the dedication of his family, including his brother and sister-in-law, Mike and Shellie Daniel, his niece and nephew, Caitlyn and Jon-Michael Daniel, and his parents, John L. and Sara Daniel.

“As far as my mom and dad, I really can’t thank them enough,” Johnnie Daniel said. “I threw them a major curveball 29 years ago, and they pretty much dedicated their lives to taking care of me and making sure I’ve had the things that I’ve needed over the years.”

He thanked best friend Cindy Freeman for making the five-hour trip to Franklinton to attend the reception, discussed the caring and giving nature of the citizens of Franklinton, and talked about the experience of running Johnnie’s Sports Shop for more than 15 years and how he was able to give back to the community by sponsoring baseball and softball teams through the business.

“I felt like it wasn’t enough to just to sponsor them,” he said. “I wanted to go watch them play because I thought it was important for the children to know that not only was I giving them a shirt and a cap, but I was going to be there in person to sponsor them also. I think I got more out of it than the kids did.”

Daniel encouraged those in attendance to find something that they are interested in and to get involved, since there are numerous areas where improvements can be made.

“If it’s not there, find people who have the same ideas as you do and new people who share your views and make an effort to make things better for the community,” he said. “The recreation district started with about 10 people who wanted to see improvements made, and I think we’ve done that over the years, with the help of a very dedicated board and the help of a community who wants to see things get better.

“We can move in two different directions. We can move forward, or we can move backwards.”

The community, he said, should not be satisfied with just maintaining the status quo.

Closing with a favorite saying, Daniel said, “We don’t remember days. We remember moments. And this is a moment I’ll never forget. Thank you so much.”

As week begins, Isaac prep is under way