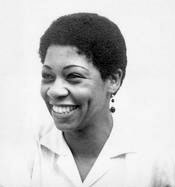 At an early age she joined Payne Memorial A.M.E. Church, where she was an active member until she left for New York City, where she lived for 40 years. In Queens, N.Y. in 1982, she organized B.A.N.D. (Black Arts National Diaspora, Inc.). She reunited with her Payne Memorial family after returning to New Orleans.

Her memories will be cherished by three aunts, Betty Smith of Baton Rouge, Carrie Smith of Scotlandville and Katherine Smith of Bogalusa; a devoted cousin, Joan S. Bridges of Baton Rouge, who cared for her diligently during her illness; a friend, Yvonne C. Alexander of New Orleans, who was like a sister; a goddaughter, Tamika Jones of Queens, N.Y.; her extended family, John W.B. Smith family of Bogalusa; and a host of cousins, other relatives and friends.

She was preceded in death by her parents; one brother, Clarence Hodge Jr.; and a nephew, Michael Simmons.

Crain & Sons Funeral Home of Bogalusa is in charge of arrangements.