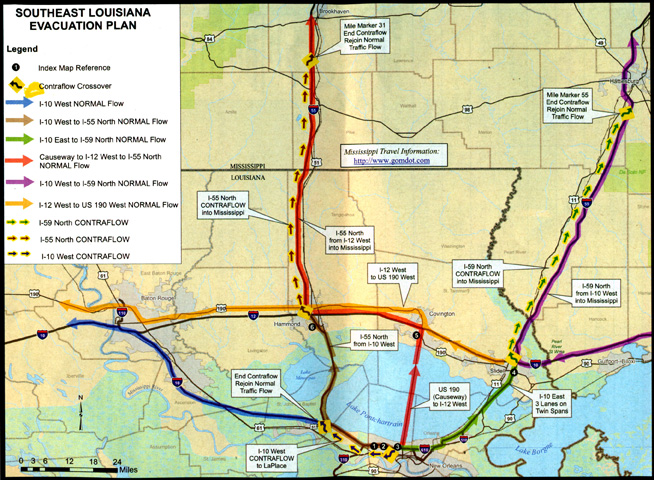 “If you wait until contraflow, you left too late.”

That’s according to Lt. John E. Riles of the Louisiana State Police. Riles and Cmdr. Paul A. Clark, of LSP Troop L, were the speakers at Tuesday’s meeting of the Bogalusa Rotary Club.

Clark, who spoke first, said that after Hurricane George in 1998, when traffic snarled badly with all the evacuation traffic coming from the southern parishes, police put together a task force of sorts to study the methods that other states charged with evacuating residents because of hurricanes were using. After studying Florida, North and South Carolina and Alabama, where they were using contraflow for quick evacuations, it became clear that contraflow could be the best method to use in Louisiana as well. However, said Clark, “From a police perspective, getting people to drive the wrong way on the Interstate is ludicrous. We can’t control the drivers on the right side, much less the wrong side.”

Nevertheless, the idea stuck and LSP, along with DOTD (Department of Transportation and Development) engineers, “came up with a plan to do a contraflow program here in Louisiana.”

Still, he said, the idea seemed crazy to police, so when in 2000 the idea was tested, driving on the interstate the wrong way “made his hair stand on end.” When Hurricane Dennis came along, although contraflow wasn’t implemented, manpower was staged at all the on and off ramps of I-55, I-59 and I-10 West to further test the efficacy of the contraflow plan, which seemed to work exactly as planned.

So when Hurricane Katrina hit, the contraflow evacuation plan was tested and ready to implement. Everything worked as planned, said Clark, and “we were able to evacuate more than 1.4 million people in a very short period of time.” That amounts to 90 percent of the residents of coastal Louisiana. The Katrina evacuation has been called the most successful evacuation in U.S. history.

Continuing the contraflow conversation, Lt. Riles said that when contraflow is in place, it goes all the way up to Brookhaven, Miss. on I-55 and Hattiesburg, Miss. on I-59. In addition, during contraflow no one can exit or enter the Interstate, except at designated places, which on I-55 are Amite and Kentwood.

Although Washington Parish doesn’t have any contraflow routes, there are evacuation routes heading into Mississippi: Louisiana Highway 21 in Bogalusa and Louisiana Highway 25 in Franklinton. While most everyone in the Bogalusa area knows where to go (Highway 21), there will be an influx of people from the south who don’t have clue, he said.

“Have a plan,” said Riles. “Have a game plan.” You don’t just get in the car and go, he said. You need to make sure you have things you need, such as a spare tire, and map if you don’t know how to get where you want to go.

And don’t try to go in business along with the interstate, Riles said, telling the story of a man who set up a tent in the middle of I-55 where he was boiling shrimp and selling his wares. The police commandeered his “business” and made him pick up and move out of the median. But he didn’t make it as far as Mississippi, said Riles. When Riles went north a bit later he found that he had set up shop in the grassy area by an off-ramp and the officers who had tasked him with boiling shrimp for them.

“They tasted great,” he said with a laugh.

Hurricane season is at its peak in July, and continues through Nov. 30. Have a plan and be prepared.

Jewelry, coin buyers to be in Bogalusa July 28…