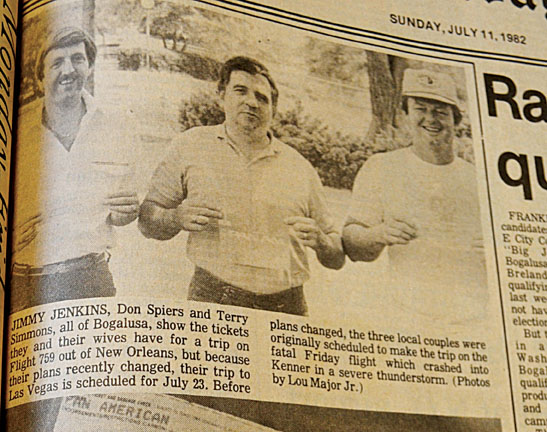 It’s a good bet that most people who were old enough to notice remember the dramatic crash of Pan Am Flight 759 into a Kenner neighborhood on July 9, 1982.

The plane took off from New Orleans International Airport bound for Las Vegas, Nev., in heavy thunderstorms just after 4 p.m. and crashed about one minute later, killing all 146 people on board and eight people on the ground. At the time, it was the second worst aviation crash in United States history.

Television news teams were quickly on the scene, and images of the horrifically tortured subdivision were soon and for hours afterward broadcast as emergency crews searched for survivors and worked to put out flames amidst the smoldering debris of homes, the jetliner and suddenly altered lives while the rain continued to fall.

The news footage, complete with the sounds of the frantic response, made the event easily one to remember, but the impact was intensified for three Bogalusa couples. They had tickets for the ill-fated flight.

Don and Georgia Spiers, Jimmy and Karen Jenkins and Terry (now deceased) and Mildred Simmons would have been among the victims if not for some bird dogs in Baton Rouge.

While they were still reeling from the fateful turn of events a day after the crash, members of the group explained that their annual late July joint vacation had been scheduled earlier in the month to enable the inclusion of Mildred Simmons’ brother Lester Pierce and his wife who planned to fly from Baton Rouge and meet them in Las Vegas.

But as the departure neared, the Pierces decided they needed to spend their money, instead, on a new yard for the dogs they bred. Although the six others already had their tickets and with considerable “moaning and groaning” due to the near last-minute change in plans, they were able to reschedule for later in the month.

The day after the crash, Don Spiers said the six could barely speak.

All of the couples were bombarded with calls from people who knew they had planned to be aboard Pan Am Flight 759 from New Orleans that Friday afternoon.

Spiers said he was tempted to drive to Baton Rouge to give those bird dogs a great big kiss. Meanwhile, he and Terry Simmons were the only members of the Bogalusa group who still wanted to fly to Vegas. The others in the group were talking about taking a train, he said.

This week as the country acknowledged the 30th anniversary of the crash, Spiers said the couples did fly to Las Vegas a couple of weeks after the tragic event. But only half of them took Flight 759.

“Times were simpler then,” he said. “They sent us a sticker to put on our tickets. We used the tickets. We did go in two weeks. But the three men took flight 759, which was the only non-stop. The women took another flight that stopped in Houston. They didn’t want to get on Flight 759.

“I recall that when we took off out of New Orleans you could hear a pin drop. No one made a sound for about the first hour of the four-hour flight.”

Spiers said he didn’t remember if anybody in the group won a lot of money on Vegas that trip, but he doubted that was the case. He said he never did meet Pierce, “the young man who backed out and saved us,” but that he hopes the dogs were “real successful and got a lot of quail or whatever they were hunting.”

Mildred, now a Starling since she remarried after Terry Simmons’ death, also praised the dogs.

“Thank God for those bird dogs, or we would have all been gone,” she said. “I still hate flying.”

Spiers said he will never forget his close call.

“I think a lot about it all every year when the July 9 date comes around,” he said. “I remember exactly where I was when I heard it on the radio. I had been looking at a house in Poplarville and was driving back when I heard WWL with breaking news that Pan Am Flight 759 had crashed. I had tickets in my dresser drawer at home. The hair stood up on the back of my neck.

“Except for the grace of God… I sure would have missed a lot around here, like four grandchildren and 30 MCCA seasons.”

“Over the years I’ve learned timing is everything,” he said.