Nielsen honored | Citizen of the Year reception held in Bogalusa 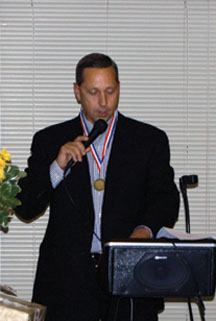 Family and friends gathered at Bogalusa Country Club on Wednesday night to honor 2011 Citizen of the Year for Bogalusa William “Bill” Nielsen Jr.

At the start of the reception, attendees mingled and enjoyed refreshments while a PowerPoint presentation featuring pictures of the night’s honoree was on display for everyone to see.

Following the recognition of past Citizen of the Year recipients by Beverly Sheridan, Bertha “Bert” Breland, second vice president of the Louisiana Retired Teachers Association, reflected on the experience of serving as 2010 Citizen of the Year and, as she jokingly put it, relinquished her “crown,” “royal robe” and “throne” to Nielsen.

“Bill, I give it all to you, and I know you’ll do a wonderful job with it,” she said. “It’s a good year, and you’re going to enjoy every bit of it.”

Buddy Adams discussed Nielsen’s dedication to his family, his community and his faith. At Annunciation Catholic Church, Nielsen is a member of the Pastoral Council and Finance Committee and serves as a Eucharistic minister, and he is a third degree mason and member of the Knights of Columbus, Adams said.

“Bill is a great father, husband, brother and friend,” he said. “Where was he when he was chosen for this honor? He was fishing with his daughter, Sarah. He serves his community. Bill is quiet, but his actions are intense. When he gets involved, he puts his whole self into it.”

Karin Ryan spoke about her brother, discussing Nielsen’s devotion to his patients at Nielsen’s Pharmacy and how proud his family is that he was selected. Four factors that go into being a good citizen, Ryan said, are honesty, compassion, responsibility and courage.

Nielsen demonstrates all of those through his actions, she said.

“Great citizens of Bogalusa before him have earned this honor, and now he’s among them,” she said. “Bill has served the citizens of Bogalusa well, with both his personal actions and his professional career. He has given back through his actions and deeds and support and care for the citizens and being one of its hometown, old fashioned, know everybody’s name and most of their kids and even grandkids, pharmacist.”

Charlie Carney shared several fishing stories and concluded with, “I’m glad to be your friend.”

John Gallaspy discussed Nielsen’s service to his community following Hurricane Katrina. Former Bogalusa Mayor Mack McGehee reached out to Bill Nielsen and his brother, Kevin, also a pharmacist, for assistance after the hurricane, and they set up an emergency clinic, Gallaspy said.

The Nielsen brothers set up what Father Patrick Collum referred to as a “MASH outpost” at the old Charity Hospital, which had electricity, and dispensed emergency medicine there for about two or three weeks, Gallaspy said.

After he was presented with a medal and a gift from The Daily News by Managing Editor Richard Meek, Bill Nielsen gave his acceptance remarks.

Nielsen gave a brief history of how his family came to live in Bogalusa and talked about growing up in the city along with his brother and two sisters.

“I would like to thank both my family and extended family and out-of-town friends; my mom and dad, for giving me the opportunity, guidance and encouragement throughout all of my life; my wife, Wendy, and daughters, Sarah and Sadie, for the sacrifices and support that you have made and given which enables me to do the things that I do,” he said.

He also thanked his siblings “for always being there, Father Pat for my nomination, and the selection committee for this valued award.”

“I would like to also thank each and every one of you for taking time out of your day to share this honor with me,” he said.

Nielsen said he feels blessed that he has the opportunity to help people and that he enjoys what he does for a living.

“Although this award is given to an individual, it commands appreciation to a large number of people that are responsible for me being here today,” he said. “Within the past two the three years, I have seen more positive changes in Bogalusa than I have seen in a long time. It is nice to see new, both in construction and pride, back in our community.”

Concluding his speech, Nielsen shared some of the words of wisdom his father imparted during his battle with cancer.

“His words were, ‘Bill, you can do a lot of things for a lot of people, but the only time you can help someone is when they need it. Die trying,’” he said.

A gift from the city of Bogalusa was presented to Nielsen by Sandy Bloom, who commended him on his work following Katrina.

“And I would be remiss if, on behalf of the city of Bogalusa, I didn’t say something about how hard you work to build a better Bogalusa,” she said. “You invest in this community.

“You believe in the future of this community, and you make a difference right here with your business and your development that you do, in addition to all of the other things that he does in the community, in his church and other organizations. The city of Bogalusa appreciates your belief in it.”