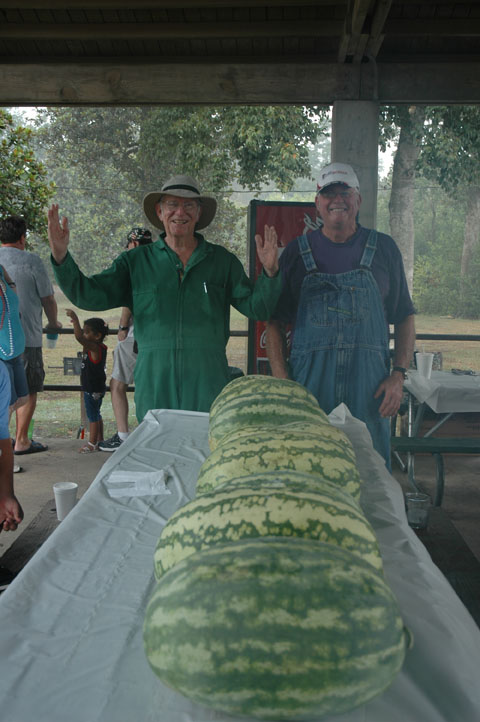 This year’s championship watermelon weighed as much as a small adult, and a couple of other contenders were as big as a not-so-little child.

The traditional fruit of the Fourth of July was in good evidence at Cassidy Park on Wednesday. Folks were bidding on and buying the big juicy fruits, eating large amounts with an eye on a prize, and spitting the seeds with every ounce of propulsion they could muster.

But the first order of business was the Washington Parish Watermelon Contest.

Local watermelon legend John Gallaspy, who for the past few years has claimed he’s getting to old to toil in the melon fields any longer but can’t seem to stop, took first prize in three of six categories.

Gallaspy’s melons ranged from nearly 30 pounds to more than 50 pounds, but Daryl Burnthorn brought in the giant of the day, a Carolina Cross watermelon that weighed in at more than 90 pounds. That melon, which was entered in the “Other” category, was named the 2012 Grand Champion.

“Many other varieties (of watermelons) were represented by growers that generously brought them for cutting and eating, as well as for the watermelon eating contest and the seed-spitting contest,” she said.

“Mickey Murphy and Jesse Sumrall gave a very informative talk on the different varieties represented as well as tips on successfully growing watermelons, including prize-winning melons.”

Gray thanks all participants, as well as longtime coordinator Henry Harrison, and invites comments or suggestions that could help make the event “even better next year.”