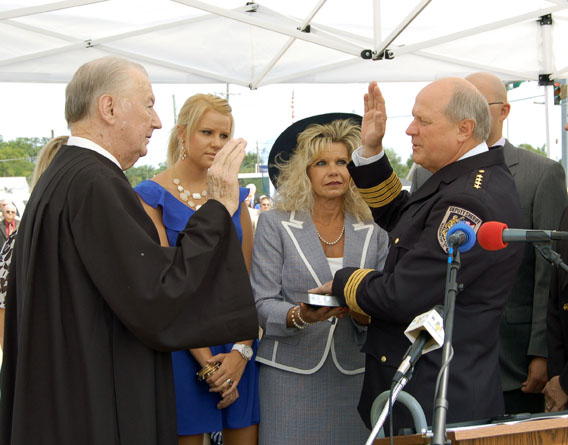 “If you commit crimes in Washington Parish you will need to be constantly looking over your shoulder because we will be coming after you and we will not stop until you are stopped.”

With those words, Randy Seal ushered in a new era of law enforcement in Washington Parish.

Several hundred spectators braved a blistering sun on Tuesday morning to witness Seal being sworn in as sheriff during a 45-minute ceremony in front of the WPSO jail. It was a historic moment as Seal is the first official to be elected to two parish-wide seats.

Judge A. Clayton James of the 22nd Judicial District administered the oath to Seal, who is the son of longtime law enforcement official Leroy Seal.

Flanked by family members, including his wife Sheila Seal, Randy Seal delivered an approximately 10-minute speech that touched on a number of topics, including getting tough on crime in the parish and a commitment to helping the FBI solve the O’Neal Moore murder.

Seal said growth appears stalled in the parish, crime is rampant, and some neighborhoods feel unsafe.

“We will work hard to improve the safety of our citizens. We will do all we can to create a model rural sheriff’s office for the 21st century. This administration will be a force for good in our parish.”

Along with partnering with the FBI to help identify and capture Moore’s killer, Seal also said he plans to erect a memorial to the slain officer, who was killed in 1965. Moore and Creed Rogers were the first black WPSO deputes.

They were shot on Louisiana Highway 21 near Varnado in a drive by shooting, a crime that produced only one legitimate suspect who was later released.

Rogers was seriously injured in the shooting.

Sources confirmed that during the past two years the FBI has begun looking into the case again, and the incident was also the source of a movie.

“Too many sheriffs have served in this office without recognizing the special circumstances of Deputy Moore’s death,” said Seal, pitching his memorial idea and adding, “this memorial will be a testament to the world that the citizens of Washington Parish stand together as we acknowledge our heroes.”

“I make a commitment to you that the Washington Parish Sheriff’s Office will cooperate with the FBI and other law enforcement agencies to finally solve this crime and bring this case to a close,” the newly minted sheriff added. “I will dedicate the resources of the sheriff’s office to find the person or persons who committed this heinous crime and bring them to justice.”

Seal said he is committed to creating a culture of excellence and transparency in his office.

“Our decisions and actions will not be hidden from plain sight,” he said.

He also committed to cleaning up the jail and has appointed Robert McDaniel as the new warden. McDaniel has worked in the Louisiana State Penitentiary as well as Rayburn Correction Facility.

Seal sworn in as sheriff