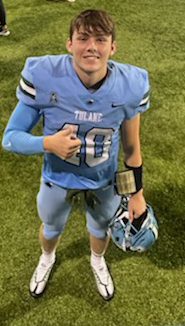 Tulane’s football team is headed to the American Athletic Conference title game.
The Green Wave capped off their regular season with a 27-24 victory over Cincinnati on Friday and wrapped up a 7-1 conference season and the team is 10-2 overall.
One of the players for Tulane is running back George Arata. Arata, who is a true freshman, is from Bogalusa and graduated from Pope John Paul II in May.
This season, Arata has had limited playing time, carrying the ball three times for 12 yards.
Tulane enters the AAC Conference Championship Game ranked 19th.
Tulane will face the University of Central Florida, who is ranked 22nd. UCF is 9-3 overall and went 6-2 in conference play.
The game will be at Tulane’s Yulman Stadium at 3 p.m. on Dec. 3. The contest will be televised on ABC.