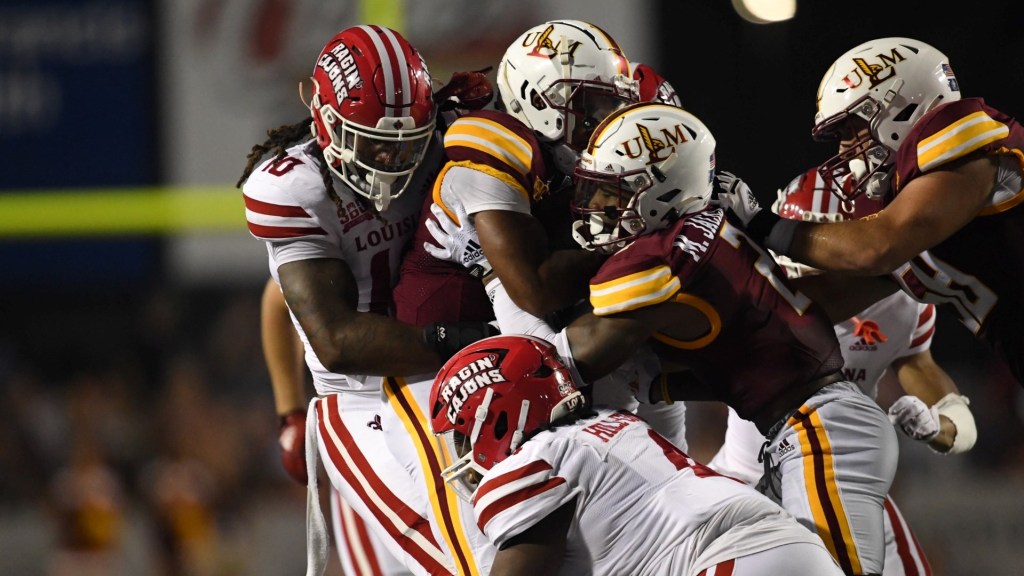 Louisiana football hits the road for its regular-season finale as it takes on Texas State on Saturday at 4 p.m. at Bobcat Stadium.

The game can be seen on ESPN+ with Brant Freeman, Keith Moreland and Koral Riggs on the call. Additionally, fans can listen to the game worldwide on the Varsity Network, Hot 107.9 FM and ESPN 1420 AM with Jay Walker (pbp), Gerald Broussard (color) and Cody Junot (sideline) on the call.

Linebacker Andre Jones, who is a 2017 Varnado High School graduate, has made 45 tackles, 7.5 for loss with 6.5 sacks, an interception, a pass breakup, two quarterback hurries and a forced fumble.

The Ragin’ Cajuns (5-6, 3-4 SBC) are looking to become bowl eligible for a school-record fifth-consecutive season. Louisiana enters the weekend tied for 11th among FBS schools with 14 interceptions on the season. Eleven different Ragin’ Cajuns have recorded a pick this season, the most of any team in the country. The defense has forced 21 turnovers, which ranks tied for 15th nationally.

Linebacker Andre Jones, who is a 2017 Varnado High School graduate, has made 45 tackles, 7.5 for loss with 6.5 sacks, an interception, a pass breakup, two quarterback hurries and a forced fumble.

Bralen Trahan has been a ballhawk for the Ragin’ Cajuns defense as the senior has four interceptions on the season. His four picks are tied for 12th in the FBS. For his career, Trahan has 13 interceptions, which is second among career active leaders in FBS and ranks fourth all-time in Louisiana history.

Texas State enters the contest after defeating Arkansas State, 16-13, on Nov. 19. The Bobcats are led by quarterback Layne Hatcher, who has thrown for 2,520 yards and 19 touchdowns. Defensively, Sione Tupou leads the way with 78 tackles while Jordan Revels has 66 tackles to go along with 11.5 tackles for loss and 5.0 sacks.

The Ragin’ Cajuns hold an 8-0 advantage over Texas State in series history.

Fans are encouraged to stay engaged with the Ragin’ Cajuns by downloading the #GeauxCajuns app. Click here for iOS/Apple platforms and here for Android platforms.