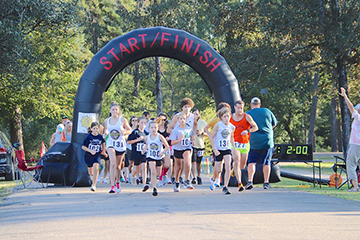 COURTESY PHOTO/Sharon Hartzog Runners are pictured competing in the Bogalusa Blues and Heritage Festival Race that was held on Sept. 24 in Cassidy Park.

“We had a great turn out for the BBHF 5K again this year!” Provost said. “Beautiful weather, coupled by some great competitive spirits, made our seventh year of holding this race a memorable one! We are looking forward to planning next year’s race!”

The top overall female runner was Adley Miller, who posted a time of 26:18.

Avery Bell was the top overall female walker. She had a time of 30:59.

Kenny Adams was the top male walker after a time of 44:38.