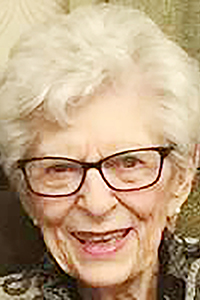 Agnes was born in Norfield, Miss., in 1923 and graduated from Bogalusa High School. After also receiving degrees from Hotel Dieu Hospital School of Nursing in New Orleans and Louisiana State University (B.S.), Agnes enlisted as an U.S. Army nurse during World War II. Postwar, she served in Germany until being honorably discharged as First Lieutenant. She went on to earn a Master of Public Health degree at Tulane University.

Agnes then served as a specialized consultant in the Cardiovascular Disease Control Service of the Georgia State Health Department in Atlanta and her published article “How Georgia Combats Stroke Damage” appeared in the December 1966 issue of The American Journal of Nursing, Vol. 66 No. 12.

In 1969, she became a commissioned officer in the U.S. Public Health Service, Region IV, covering eight southern states where she focused on promoting public health priorities and building regional relationships. On Sept. 30, 1983, she was designated a Life Member of the Reserve Officers Association of the United States “in recognition of patriotism, fidelity, and perpetual commitment to the support of a military policy for the United States that will provide adequate National Security.” Agnes Newell retired as a Nurse Director in 1985, with the commissioned officer rank of Captain (O-6).

In her personal life, Agnes was a devoted member of the Holy Spirit Catholic Church, 4465 Northside Drive in Atlanta, Ga., where she served as a long-time volunteer counting offerings made to the church. From 1983 to 2002, often in the company of family or church friends, she traveled extensively in parts of Europe, Asia, Africa, and Australia, and avidly photographed her journeys. Always a gracious and charming lady and hostess, Agnes dressed in style and was quick to smile. Her family members, ranging from kids to adults, always considered a stop at Aunt Agnes’ a fun time. She thoroughly enjoyed being with others and was still dancing at her 99th birthday party.

After 60 years away, Agnes relocated to Louisiana in 2005 just in time to experience Hurricane Katrina with her sister Louise. The two sisters shared their lives together until Louise passed away in 2016.

Visitation will be held Saturday, Oct. 8, at Annunciation Catholic Church, 517 Ave. B in Bogalusa, at 9 a.m., with Mass to follow at 10 a.m. Interment will be at Ponemah Cemetery in Bogalusa. To share a memory of Agnes or send a condolence to the family, visit online at www.pooleritchiefuneralhome.com.