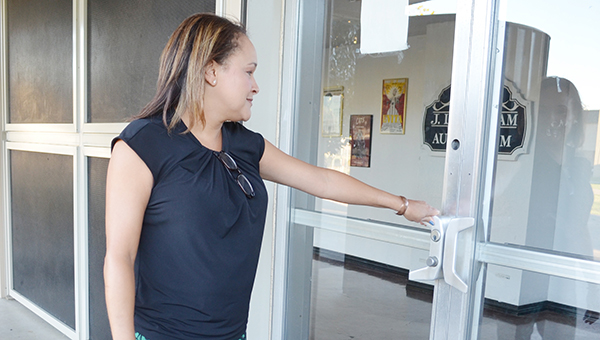 Bogalusa Mayor Wendy Perrette shows that the doors to the Bogalusa High School auditorium were locked Tuesday, after a mayoral candidates' forum had been originally scheduled for that night. Organizers with the forum said the event was canceled, but Perrette said her office received no official confirmation of that cancelation.

The Community Action Organization (CAO) citizens’ group had originally intended to hold a mayoral candidates forum on Tuesday at Bogalusa High School, but at least some citizens still showed up after the event had apparently been canceled.

Incumbent Mayor Wendy Perrette was present Tuesday and expressed confusion as to whether the event had been called off. Perrette and the two challengers, Tyrin Truong and Bogalusa City Council member Teddy Drummond, were originally invited to participate.

“Nobody contacted us in the office or otherwise,” she said. “I said in the (Tuesday, Sept. 20) council meeting that I wouldn’t put up with any foolishness. If there was any foolishness, I’d walk out. But I still intended to attend tonight.”

According to a video recording of that city council meeting, taken by David Miller of Mt. Hermon Web TV, Perrette stated she would have been happy answering a set list of questions, but had concerns if the audience was able to ask random questions.

“I will not participate in a debate whenever individuals have kicked at me in my teeth, in my face, on Facebook, and it’s very easy to see,” she said. “I don’t have to go see it (online), but other people screenshot it and happily send it to me. I have no problem with a debate, at all, if it can stay on the questions that’s being asked, that you’ve given and provided. But as soon as it turns into a free-for-all, I will not be involved. You can play by yourself.

“Our public relations person was supposed to have (reached out to the newspaper), and she thought I had done it,” Miller said. “I notified the radio station and put fliers out. I’m very sorry I missed (the newspaper), because y’all have been very supportive of us.”

Miller said that the event was canceled because the CAO interpreted Perrette’s comments as stating she would not attend.

“We canceled that thing because she said she was tired of people bashing her on Facebook,” Miller said. “I told her, ‘Wendy, people bash Jesus Christ on Facebook.’”

Truong emailed the Daily News at 9 p.m. Tuesday with a comment on the forum confusion.

“It is my understanding that The Daily News accompanied the mayor to what would have been a debate tonight,” Truong wrote. “I am writing to ensure that headlines do not capture the situation in the wrong light. At the council meeting Tuesday night (Sept. 20), Mayor Perrette stated that she would not be attending the debate because people have ‘kicked at her in the teeth’ on Facebook and other forms of social media. She also stated that Councilman Drummond would not be attending, referencing a message he sent in a group chat between the three of us stating that he would not be attending. I just don’t want the narrative to state that Councilman Drummond and I did not show up. The debate was canceled and this was a political stunt pulled today.”

Drummond told The Daily News on Friday morning that he would not attend any forum hosted by the CAO.

“(Miller) is the leader of that organization and he has a Truong sign in his yard,” Drummond said. “What kind of fair shake do you think I would get? I told him that if a reputable organization that’s not biased would host a debate, then I would be there.

“(Miller) has got his mind made up for whom he prefers. He needs to sit this out, in my opinion.”

In a letter posted online prior to Tuesday, the CAO provided a list of the questions that were going to be asked at the forum (one such question was “What are each of your plans for economic growth?”) Miller also addressed Drummond’s concern about bias, which had been expressed previously.

“As a nonprofit, the Community Action Organization is not allowed to endorse candidates or engage in supporting any one person politically,” Miller wrote, on behalf of the CAO. “We are champions for fairness and to alleviate these concerns, we have constructed 10 questions that each candidate will have to answer. We are making them public so that there is no perception of impropriety. After the candidates answer these questions, members of the audience will be allowed to submit questions upon entrance into the auditorium. We ask that all audience members be respectful to the candidates or they will be asked to leave.”

Miller said that the CAO still wants to hold a forum, and would like to include the city council candidates as well. Drummond told The Daily News he would not attend any future forum hosted by the CAO.