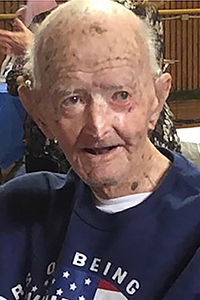 Until age 100, he actively supported the National World War II Museum by donating memorabilia, providing oral history, and actively engaging with museum visitors as he participated in the museum’s mission to tell the history of his personal American experience in the war that changed the world.

As a frequent speaker at New Orleans-area Northshore schools, he repeatedly advised students of the importance of education, bringing the relevance of our country’s history into the classroom, by sharing his personal experiences to educate others about the war, bring understanding of the true price of freedom and seeking to inspire future generations. He treasured a collection of hundreds of “thank you” cards and letters from many children whose lives were touched by these interactions with him.

Ubert maintained active membership in the International Union of Operating Engineers, Local 406, since 1952, where he was the oldest living member. After retiring as an operating engineer, he purchased his own equipment and until age 86 could be found towering at the end of a 60-foot boom, sawing tree limbs from his perch.

During his distinguished military service in World War II, Ubert parachuted at night into occupied France five times, covertly working with members of the French Resistance behind enemy lines, gathering intelligence used to plan the D-Day invasion. On June 6, 1944, he flew two missions bringing paratroopers to France from Merry Field, England, as part of Operation Overlord.

After high school, he had joined the Civilian Conservation Corps, the work relief program that employed young men during the Great Depression. Quickly recognized for his intelligence, educational skills, and ability to speak French (learned as a boy from sharecropper neighbor children) he was chosen to work in the CCC literacy program, teaching young French men from South Louisiana to read and understand English. He often credited this as a reason he was later recognized and selected for certain military intelligence assignments.

Ubert was a member of First Baptist Church of Sun, where he is remembered for having placed the steeple on its roof many decades ago. He maintained active membership in American Legion Post 24 until his death. In 2021, he moved to Southeast Louisiana War Veterans Home, where he lived his remaining days as the most revered and senior resident, calling bingo, and swapping war stories with his Band of Brothers.

A funeral service will honor Ubert Terrell’s lifetime of achievement, service and commitment on Saturday, Oct. 1, at noon, with visiting hours beginning at 9 a.m. at Brown-McGehee Funeral Home in Bogalusa. Interment will follow at Hillview Memorial Gardens.