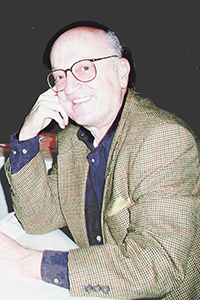 Butch passed away peacefully and on his own terms on Sept. 7, 2022, in Plano, Texas, after a long illness. He was born on Aug. 17, 1940, in New Orleans, to Rose Lucille “Sweetheart” and Herman B. Casanova Sr., and raised in Bogalusa and New Orleans.

He was preceded in death by his parents; beautiful sister, Rose Marie “Cookie” Casanova Earles; and infant brother, Herman Jr.

Butch was a graduate of Bogalusa High School and earned his bachelor’s degree magna cum laude from Spring Hill College while a Jesuit novitiate at Grand Coteau, Ala. After leaving seminary, he served with honor in the U.S. Navy Reserve during the Vietnam War era and enjoyed a long and successful career in the technology sector. He worked at Boeing on the Saturn rocket program, after which he joined IBM, where he was for more than 30 years, predominantly engaged in marketing. His work with IBM allowed him to travel the world and he was posted for several years in Tokyo and Beijing. Butch was a Renaissance polymath who spoke several modern and ancient languages, was an accomplished writer and artist, and had a terrific sense of humor. He also loved cats.

His survivors include daughters, Rebecca X. Casanova (Kate) of Portland, Ore., and Elizabeth A. Casanova Yost (Steve) of Crystal Lake, Ill.; son, John D. Casanova (Katie) of Frisco, Texas; seven beautiful grandchildren; five nieces and nephews; and first cousins, Roger and A.J. Ruiz, Diane Ruiz Migliore, and Cheryl Jones. Beloved first cousin Kenneth J. Ruiz preceded him in death. He will be missed greatly by his family as well as friends close by and all over the world.

Per his wishes, a graveside service will be held at the Casanova family plot in Ponemah Cemetery in Bogalusa at 10 a.m. on Saturday, Oct. 1. In lieu of flowers, please send donations in his memory to Operation Smile, which provides surgery and other care to children with cleft lip and palates.