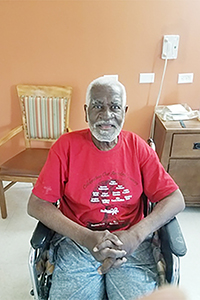 Joseph Mitchell Bailey, the son of the late William and Aretha Bolton Bailey Jr., was born in Bogalusa on Nov. 14, 1935. Joseph left his earthly home for his heavenly home Aug. 26, 2022. He was baptized as an infant by the Rev N.L. Lumz in the St. Paul A.M.E Church.

After serving three years in the U. S. Army, he resided in San Francisco, Calif., and in 1976, Joseph returned home.

He will be sadly missed by those that knew him.

Joseph leaves to cherish his memories: a niece, Wanderlyn Weary of Bogalusa; two grandnieces, Yolanda (Albert) Magee of Arlington, Texas, and Terrie Weary of Marion, Texas; and a host of relatives and friends.

He was preceded in death by his parents, William and Aretha Bolton Bailey Jr.; his brother, Ernest Bailey; two sisters, Margie Bailey Evans and Marilyn Bailey Crews; and his niece, Shannon Weary.

The drive-through viewing will be Friday, Sept. 2, at Crain and Sons Funeral Home in Bogalusa, from 4 p.m. until 6 p.m.

Visitation will be held at Crain and Sons Funeral Home on Saturday, Sept. 3, from 10 a.m. until 1 p.m., with the funeral service to follow at 1 p.m. Interment will be at the Bogalusa Cemetery.