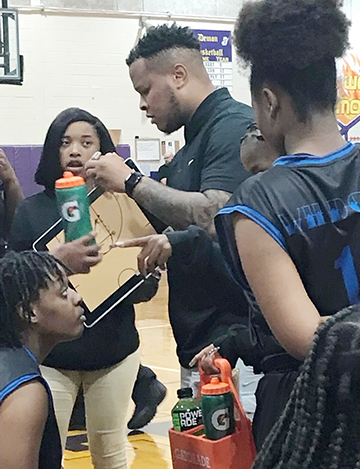 Mace Copeland Jr. has been named as the head boys basketball coach of Varnado High School.

“I was the assistant girls coach last year and I felt like taking this job for the boys would be a good idea to help rebuild the program and get a state championship,” Copeland said. “The boys only have one state championship (1988) and I want to help get them back to being successful again.”

Copeland is in his second year at Varnado.

Last year, he was assistant basketball coach for the girls team. Varnado’s girls basketball team won seven games last year, which was the most they had won since the 2015-16 season.

“I’m a person who believes in academics and discipline and teaching fundamentals,” Copeland said.

This year, Copeland is the defensive coordinator for the football team and he is the school’s track/field coach.

Copeland started his career at Morgan City where he was the defensive coordinator.

After that, he went to Loreauville and was the assistant boys basketball coach.

He then went to Acadiana and was the assistant boys basketball coach.

Copeland was at Livonia where he was the special teams coordinator and the boys junior high school basketball coach before heading to Varnado.

“We are very excited to have Mace lead our boys basketball team this season,” Varnado principal Jennifer Beninato said. “This is his second year at Varnado and he has been a tremendous asset to our athletic program.”

Coaching runs in Copeland’s family, as all of his uncles are head coaches in either football, track/field or basketball.

Copeland graduated from West St. Mary in 2013. He played tight end and linebacker.