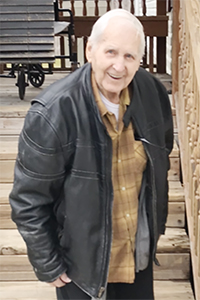 He was born in Lindenwold, N.J., on May 12, 1929, graduated from Bogalusa High School in May of 1946 and soon enlisted as an Interior Communications Electrician in the U.S. Navy for 3.5 years, spending 18 months in China. Bob served on three ships during his time of service: the U.S.S. Estes, the U.S.S. Union and the U.S.S. Gunston Hall. He was discharged in April of 1950 and was recalled to active duty in September of 1950 during the Korean Conflict.

After his service he graduated from Tulane University with a degree in Journalism and moved to California where he worked as a journalist in the Editorial Department of the San Bernadino Sun Teller. He joined the Associated Press in New Orleans in 1956 and retired in 1994.

He is survived by his nieces, Patricia Warner Seal of Bogalusa, and Anita Warner Abbott of Aubrey, Texas, and a nephew, Roger Warner of Slidell, as well as several great-nieces and great-nephews.

Bob was predeceased by his parents, Harold E. Rowand and Otillie Riggs Rowand, and his sister, Mildred Rowand Warner, and her husband, Wilton L. Warner.

The family wishes to thank the staff of Park Provence Assisted Living and Memory Care for their excellent care of our Uncle Bob during his stay with them.

Funeral Services will be held at the Southeast Louisiana Veteran’s Cemetery, 34888 Grantham College Road in Slidell, on Friday, July 29, 2022, at 10 a.m.