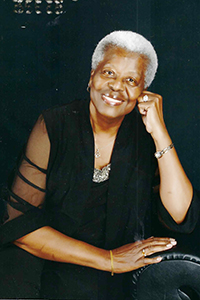 Time to Be Born:

Ellar Mae Hatcher was born on Nov. 15, 1942 to the parentage of Johnnie (Jack) Hatcher and Savannah Peters Hatcher, and to that union four children were born — Ellar being the oldest, Clemeal (Shorty) Hatcher, Mary L. Hatcher May and Booker T. Hatcher. Ellar departed this earthly life on June 28, 2022, surrounded by her loved ones.

As a young child Ellar was carried to Mary’s Chapel UMC, where she was baptized, under the leadership of Rev. Franklyn. She was active in Sunday school, sang in the youth choir and attended MYF. High school life was good, Ellar was an A student, she loved basketball, but she says she did not use all five of her senses, she married early, and she thanks God for daughter Anita. But God has a plan for all of our lives, she met and married William T. Foster Jr. and to this union three daughters were born, Shondalon G. Foster, Nanette P. Blackwell and Melissa A. Foster, and later was blessed with a son, Undra L. McKenzie from her niece and nephew, Undra and Julie Moses. In 1966 the family moved to California; it was hard to leave her family especially her mother, who always had her back, but God is good all the time, so she knew that they were making the right move. They joined Southwest Methodist Church for a few years where the girls were baptized but in 1969, they moved to the westside and they joined New Congregational MBC under the leadership of Dr. L.M. Jones. Ellar worked in many areas of the church, Sunday School, Mission, Usher Board, and the finance office. Ellar retired from New York Life in 1989 to work full time at the church. In 1992, Ellar received her calling into the Ministry; she received her License on July 12, 1993, and she served with joy as part of the Ministerial staff. Ellar moved back to Louisiana in 2003 and returned to Mary’s Chapel; after seven years she decided to join her husband at Mt. Zion MBC where she was active in Sunday School and Mission. On Nov. 26, 2017, she was blessed to bring the message at the 11 a.m. service and was licensed by Dr. Byron Muse. Her subject that Sunday was “Winning The Spiritual Lottery.” Ellar continued to minister and serve until her health began to fail.

The funeral service will be held on Saturday, July 16, at 11 a.m. at the Mt. Zion Missionary Baptist Church, with the Rev. Dr. Byron Muse officiating. Interment will be in the Robinson Cemetery.