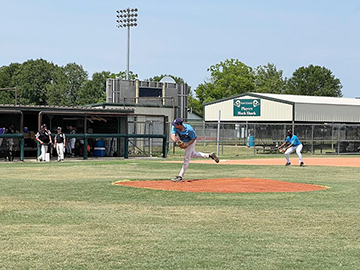 COURTESY PHOTO Acadiana Rays Austin Bradford throws a pitch in a game. Bradford, who graduated from Franklinton in 2015, won the MVP of the Acadiana Amateur Baseball League’s championship game.

The Acadiana Rays’   Austin Bradford won the MVP of the Acadiana Amateur Baseball League’s championship game that was held on June 26.

Bradford, who graduated from Franklinton in 2015, threw a complete game, which was nine innings, and struckout 14 in his team’s 12-1 victory.

The AABL is a men’s league for players that still want to compete and play baseball after their college or high school career. Bradford said they can have fun and still get to compete. Players are 18-40 years old. The season starts in March and runs every Sunday until this past weekend with off days for Mothers and Fathers Day.

Right now there are four teams, but Bradford said they will expand to six clubs.

The teams played 12 games this year.

Bradford pitched the opening weekend for the first time in 10 months and threw seven shutout innings.

This year, Bradford helped the Rays on the mound as well at the plate. Bradford led the league in homers with four.

Prior to this season, he had one homer in his entire life.

“I struggled at the beginning,” Bradford said. “I had terrible plate discipline. I thought it would just be guys trying to have fun and figured I’d be able to take advantage of that. I quickly learned that these guys could play. Once I was able to tighten up the zone, my hitting was able to improve, but I just wasn’t able to make enough contact. It was either the big fly or the big K.”

In college, Bradford played for LSU-Eunice in 2016-18 with 2016 and 2017 being redshirt years because of injury. Bradford then played for the University of Louisiana at Lafayette from 2019-2021. Bradford graduated from the University of Louisiana at Lafayette with a triple major in physical science (2018), general studies (2019) and business management (2021). He also has minors in business and math. 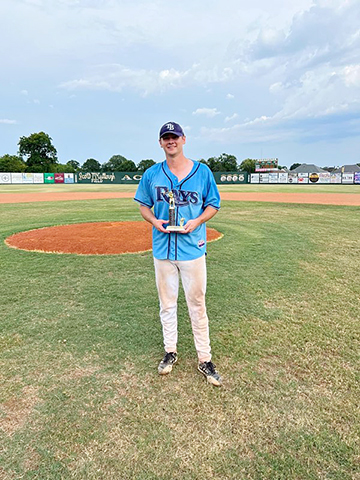