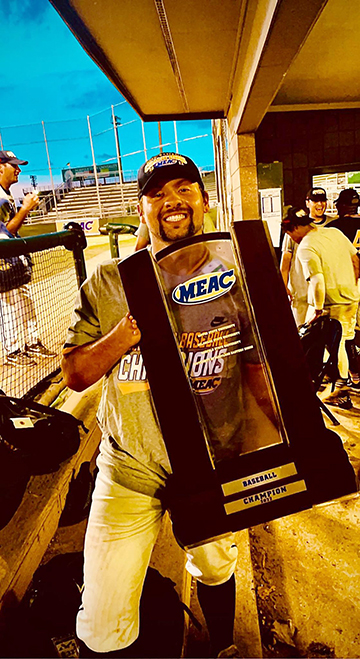 COURTESY PHOTO Coppin State University’s Tim Ruffino, who is a 2019 graduate of Bowling Green School, is pictured with the MEAC Conference Championship Trophy.

Coppin State went 3-1 in the event.

They began the tournament with a 9-8 victory over Maryland Eastern Shore on Thursday.

The next day was a 15-5 win against Delaware State, which put Coppin State in the finals.

Coppin State needed to win one game to win the title, while Delaware State had to win twice in the double-elimination event.

Delaware State won the first game, 4-3, but Coppin State rebounded in the second with an 18-12 victory to win the title.

This season, Coppin State is 24-28 overall and they went 17-13 in conference play, as they were second.

The is the team’s first trip to regionals. The closest Coppin State had been to regionals was in 1995 when they were in the NCAA play-in game.

Tim Ruffino, who graduated from Bowling Green School in 2019, is a pitcher for Coppin State University.

“It was special. This school has never really won the conference and made it to regionals,” Ruffino said. “From where this program was when I came in to where it is now, is something special to be a part of.”

This season, Ruffino is 4-2 with a 3.66 earned run average in nine games that spans five starts. Ruffino has 26 strikeouts and 17 walks in 32 innings.

Ruffino, who is a sophomore athletically, has been injured since mid-April.

Winning the conference title means that Coppin State has made it to the regionals. Coppin State will find out where they are headed for regionals when ESPN2 airs the NCAA Baseball Selection Show on Monday.