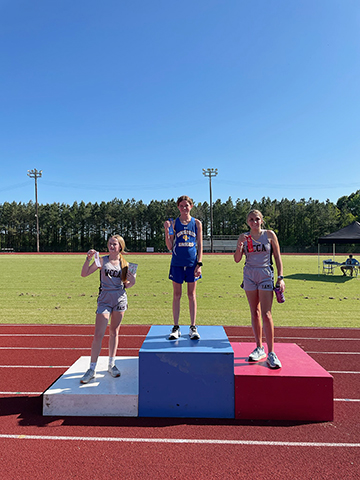 Ben’s Ford Christian School’s Avery Dantin and Delaney Perrette both won an event at the 2022 Class 3A South State meet that was held last Wednesday and Saturday at Canton Academy.

That race was held on Wednesday along with the field events. The rest of the track events were on Saturday.

Perrette captured the 100 after clocking in at 14.89 seconds.

Teammate Olivia Norwood was sixth in 15.91.

Dantin came in third place in the 1,600 with a 6:42. Wilkinson County Christian Academy’s Ann Pantin topped the event in 6:12.

The field events are also on Friday. The rest of the track events are on Saturday. Ben’s Ford was the only team from Washington Parish in the meet.

Perrette and Norwood were sixth and seventh in the triple jump with distances of 25 feet, 0.25 inches and 23-8.25. Wilkinson County Christian Academy’s Kylie Bolden won at 32-9.

Madeline Temples and Rachele Boschi were sixth and seventh in the shot put at 22-2 and 21-9. Claiborne Academy’s Bre Shively won at 29-10.

Norwood and Boschi came in seventh and eighth for the discus with throws of 55-6 and 43-0. Claiborne Academy’s Alee Spigener won at 92-1.

Tallulah Academy was second with 49.5 points, followed by Claiborne Academy’s 48, Prairie View Academy of Louisiana’s 21 and Ben’s Ford Christian School, who rounded out the top five, with 16 points.