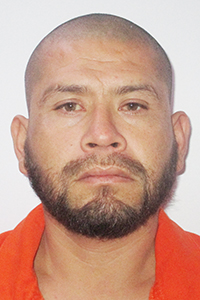 Miguel Angel Manriquez, 34, a resident of Louisiana Highway 16, fled the parish shortly after committing rapes in the Pine area on Aug. 6, according to Chief Deputy Mike Haley of the Washington Parish Sheriff’s Office.

Haley said that WPSO detectives investigating the rapes obtained a warrant for Manriquez’s arrest. The warrant was entered into the national criminal justice database so that any law enforcement contact in the United States would result in his arrest.

Haley said that Manriquez was captured in El Paso, Texas, on Sunday, Dec. 5, and held by the Sheriff’s Office there until he could be extradited to Washington Parish. Details of his arrest are not available.

Extradition was approved by Texas authorities and Manriquez was transported to the Washington Parish Jail on Monday, Dec. 20, at which time he was booked on three counts of rape, Haley said. His bond was set at $750,000. Details of the rapes will not be revealed in order to protect the identity of his female victim.

Manriquez has one previous stay in the Washington Parish Jail. In 2008, he was booked into the jail on a charge of aggravated battery.

“We don’t know exactly where Manriquez was or what he was doing in the four months he was on the run,” Washington Parish Sheriff Randy Seal said. “We do know that he is now in our custody and must face the District Attorney and the 22nd Judicial District Court to answer for his crimes.

“We are grateful to the El Paso County, Texas, Sheriff’s Office for holding him for us. This is a good example of the wonderful cooperation of law enforcement agencies throughout our great nation.”