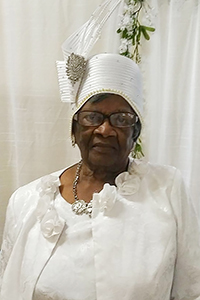 After serving together at Lear’s Hill Church of God in Christ, then Brother and Sister Conerly moved their growing family to Magee’s Temple Church of God in Christ as founding members, under the leadership of late Superintendent Monroe Magee, in 1966. At Magee’s Temple, she worked tirelessly alongside her husband to make the church prosper. District Missionary Conerly worked in just about every auxiliary within the church. A Sunday School teacher, Prayer & Bible Band President, Sunshine Band, and Purity Worker, Home & Foreign Missions worker, and teacher of the gospel.

A drive-through viewing will be held on Wednesday, Dec. 8, from 4 p.m. until 6 p.m. at Crain and Sons Funeral Home in Franklinton.

The funeral service will be on Thursday, Dec. 9, at 11 a.m. at Magee’s Temple Church of God in Christ with Supt. Cecealine Tate, pastor, officiating. Interment will be in St. James Cemetery.
Crain and Sons Funeral Home of Franklinton is in charge of arrangements. Sign the guestbook online at www.crainandsons.com.