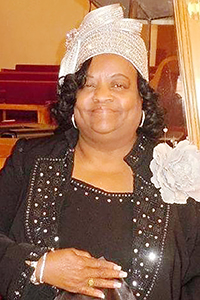 Mother Deloris Buckley Brown was born in Bogalusa to the proud parents of Roy and Helen Buckley. She was educated in the Louisiana elementary and secondary school system, where she excelled in academics. She was raised in a Christian home and attended Second Baptist Church, where she received significant spiritual instruction and training.

After being joined in holy matrimony to the late Elder Alton Ray Lee, she became a member of St. John’s Temple Church of God in Christ, under the leadership of the late Bishop John White, former General Board Member C.O.G.I.C. She received the baptism of the Holy Ghost and this experience empowered her for the life’s journey.

The funeral service will be Friday, Nov. 19, at 11 a.m. at St. John Temple C.O.G.I.C., with Pastor Eric Clayton officiating.

Crain and Sons Funeral Home of Bogalusa is in charge of all arrangements. Sign the guestbook online at www.crainandsons.com.