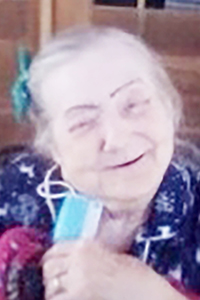 Shirley Ryals McCain, born Jan. 23, 1938, passed away on Oct. 29, 2021, at the age of 83. She was surrounded by her family at her daughter’s home in Bogalusa. She was resident of Angie and Varnado for many years, along with her husband, the late Mack McCain.

Mrs. McCain was preceded in death by her husband of 54 years, Mack McCain; a grandson, B.J. Hartzog; her biological parents, Lawrence and Dollie Ryals; the parents who loved and raised her as their own, Rankin and Crettie Ryals; her siblings, E.J. Ryals, Herman Ryals, Hubert Ryals, Elder Ryals, Bobby Ryals, Dorothy Ryals, Doris Ryals and Vera Ryals; a special sister, Margarette Ryals; her half brother and sister, Larry Ryals and Laura Ann Ryals; and also, a very special niece, Arlene McCain Hagar.

Visitation will be held Saturday, Nov. 6, at Poole-Ritchie Funeral Home from 10 a.m. until time for the services at 2 p.m., with the Rev. Kelly Penton and Bro. Brian Dunn officiating the services. Interment will follow at Bonnie Cemetery.