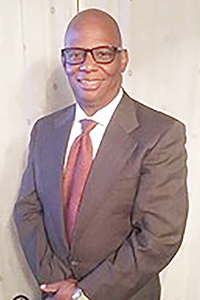 On Nov. 12, 1964, God blessed Attie Davis Sartin and Orastine Lampton Sartin with a son who they named Edward Fitzgerald Sartin. Edward was raised and educated in Bogalusa, and graduated from Bogalusa High School in 1983. While in high school, he loved playing football. After graduation, he attended Dillard University in New Orleans, where he majored in Business Administration. During the fall of 1984, Edward became a member of the Alpha Phi Alpha Fraternity, Inc. He completed his graduate studies in the 1987. After being called to ministry, he attended Harper Baptist Seminary in Sandy Hook, Miss., and Christian Bible College in Slidell.

Edward was introduced to Christ at an early age, joining Mt. Carmel Baptist Church under the leadership of Dr. Tom Bailey Jr. He later became a member of New Triumph Baptist Church, where his uncle, the Rev. Jacob Sartin Jr., was the pastor. After marriage, he united with Mt. Zion Missionary Baptist Church where Dr. Alphonso S. Nelson was the pastor. While at Mt. Zion, Edward was very active in ministry. He was a member of the Senior Choir, a Youth Counselor, and Sunday School Field Superintendent for Second Springhill District Association. In March of 2014, Edward was licensed to preach the Gospel. He continued his membership there under the leadership of Dr. Byron Muse, who ordained him in March of 2019. On March 8, 2020, Edward was installed as the pastor of White Hall Missionary Baptist Church in Bogalusa, where he preached and taught the Word of God until God called him home.

In November of 1982, Edward met the love of his life, Tammy Williams, and they were married on Dec. 22, 1990. Together they raised their children to love Christ and to love each other. His family was his pride and joy, always providing support and guidance. Throughout his lifetime, Edward has several jobs, which included being an educator in the Bogalusa City School System and working for many years in the offshore oil industry for Nabors Offshore Corporation where he worked until death.

A drive-through viewing will be held on Friday, Oct. 1, from 6 p.m. until 8 p.m. at Crain and Sons Funeral Home in Bogalusa.

A funeral service will be Saturday, Oct. 2, at noon at The Kingdom of God in Bogalusa. Interment will be in Robinson Cemetery.