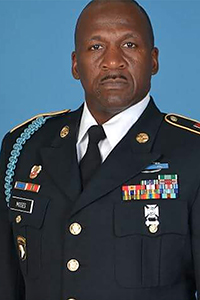 Malcom D. Moses I was born Aug. 4, 1958, to the union of Ossilean and the late Oscar Lee Moses. He attended and graduated from Varnado High School in 1976.

Malcom married his high school sweetheart Donice Moses on June 4, 1977. They were blessed with five children but were parents to many others as well.

After graduating high school, Malcom enlisted in the U.S. Army. After completing Basic Training and AIT, Malcom’s first duty station was in Ft. Ord, Calif., and his first tour overseas was in South Korea in 1978. He was later stationed in Heilbronn, Germany from 1983-1986. In 2004, with Malcom’s love for his country and a desire to continue his mission in the military, he enlisted in the U.S. Army National Guard. He participated in Operation Enduring Freedom in Afghanistan in 2013. Malcom was medically discharged in 2014.

Malcom worked for International Paper for 25 years until his retirement.

When Malcom left the military and retired, he pursued a new mission — mentoring and teaching children in the community.

A memorial service will be held on Wednesday, Sept. 15, at 11 a.m. at the Cook-Richmond Funeral Home Chapel Bogalusa location. Apostle Clayton Bullock will be officiating.