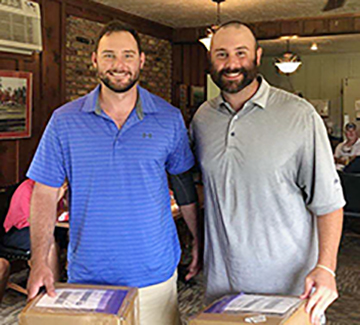 COURTESY PHOTO Pictured is the winning team of the first flight in the YMCA Classic. From left are Andrew Gilly and Alex Billings.

“We felt the golf tournament was real good,” YMCA Board Member Stuart Parker said. “We had a good turnout. We had more people than we did last year. Everybody enjoyed it. Just about everybody went home with prizes. The food was very good. This year, we had Boston butts (pulled pork). Michael O’Ree donated the food to the ‘Y.’ It was very exceptional. Everybody enjoyed the tournament. It was a lot of fun. The weather cooperated. The Lord let it rain just as soon as it finished. This helps the ‘Y’ with paying the bills and helps with programs. We look forward to next year. Hopefully we can make it bigger and better.”

The tournament had 34 golfers across 17 teams in the two-person scramble.

Duane Billings and Mike Melancon came in second place for the first flight, while Jim Wilson and Mark Barrentine were second in the second flight.