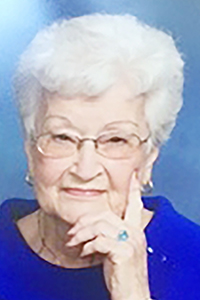 Joyce L. Rogers passed away on Aug. 29, 2021, at the age of 97. She died peacefully surrounded by family members at her home in Bogalusa. She was born on Dec. 9, 1923, and was a lifelong resident of Bogalusa.

Mrs. Rogers was preceded in death by her loving husband Robert, who was also a lifelong resident of Bogalusa and proprietor of the long-established Pleasant Hill business Rogers’ Cleaners and Pressing Shop. She was also preceded in death by her father, John Riley Lumpkin, and her mother Missouri Smith Lumpkin; and her siblings, Floyd Lumpkin, Carson Lumpkin and Lyndal Snowden.

Mrs. Rogers was a faithful member of the First Baptist Church of Bogalusa, where she worshipped for 78 years. Her faith in God and reliance on Jesus Christ for her salvation was never in doubt. She had a love of nature and affinity for God’s animals and plants. Those who knew of her care for the raccoons, Rascal and Booger, as well as any other forest creature that dwelt in the wooded ravine behind her home. She loved gardening and had nurtured a Garden of Eden in her yard. The telling of Joyce’s life would not be complete without remembering how she loved the people around her and how she had a special way of showing it in her words and deeds, through her many blessed years she was surrounded by a family of friends who supported her to the end. This was particularly true of her “Pokeno Sisters” who turned a game into a sisterhood. The love and support these ladies give through good and bad times meant the world to Joyce. It was a better world with Joyce around and her memories will last in the hearts of many.

A visitation will be held Friday, Sept. 10, from 9 a.m. until time for the services at 11 a.m. at Poole-Ritchie Funeral Home, with the Rev. Michael Pogue officiating the service. Interment will follow at Ponemah Cemetery.