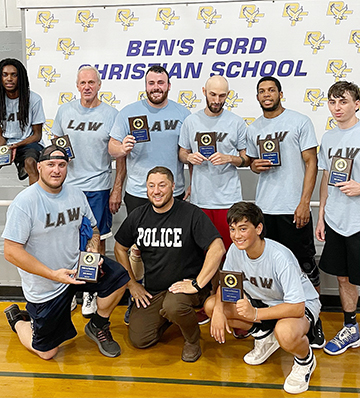 The Bogalusa Police Department won the Police vs. Preachers Basketball Tournament that was held on Saturday at Ben’s Ford Christian School.

“We had a really good turnout and I want to thank everyone who participated and our sponsors who gave,” Ben’s Ford Baptist Church/Ben’s Ford Christian School Pastor Caleb Martin said. “I want to personally thank our preachers for all they do in our community and all of the police for the sacrifices they make in our community.”

Games were two 15-minute halves with a running clock.

The first game was won by Team Bishop over Team Order.

The third-place game was next and Team Elder won that contest over Team Order.

Then the title game took place and Team Law was victorious over Team Bishop. 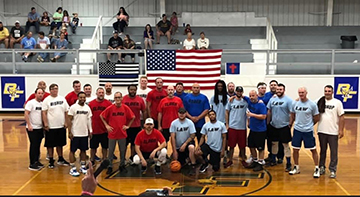 COURTESY PHOTO
Pictured are the four teams that competed in Saturday’s Police vs. Preachers basketball games. The police squads were in Team Order (Washington Parish Sheriff’s Office) and Team Law (Bogalusa Police Department), with Team Bishop and Team Elder as the preacher squads.