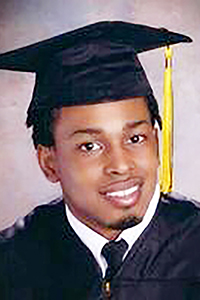 Montrell La’Shay Quinn was born July 26, 1996, to Clarence Quinn Jr. and LaToya Hutchinson. He departed this life on Saturday, April 3, 2021.

At an early age, he became a member of the Mt. Carmel Baptist Church of Bogalusa, where he sung in the choir in his younger years.

He was employed with Sears in Bogalusa. He also attended Grambling State University.

A drive-through viewing was held on Friday, April 9, from 11 a.m. until 1:30 p.m. at Crain and Sons Funeral Home in Bogalusa.

The funeral service will be Saturday, April 10, at 11 a.m. at Mt. Carmel Baptist Church with the Rev. Douglas Hart, pastor, officiating.