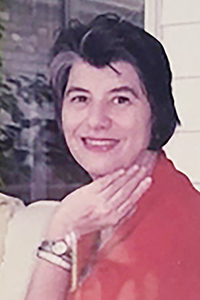 She is survived by her daughter, Paula (Daniel) Williams of Bogalusa; her grandchildren, Sciana Lavergne, Evan Williams, Aspen Williams and Tyler Williams, all of Bogalusa; two brothers, Richard “Dickie” Sinopoli and Ronald (Brenda) Sinopoli, both of Bogalusa; and her sisters, Janice (Larry) McClaflin of Walland, Tenn., Marian (Jimmie) Thomas of Covington, and Linda Messina of Bogalusa. She is also survived by numerous nieces, nephews, other relatives, and friends.

She was preceded in death by her husband, Drewey A. Kile; her parents, Angelus and Lillian Sinopoli; and her brother, Joseph Sinopoli.

Services celebrating her life were held at Poole-Ritchie Funeral Home and Crematory on Wednesday, Sept. 2. Visitation began at 11 a.m. and continued until the funeral service began at 2 p.m. Bro. Duane Ball officiated. Interment followed at Otzenberger Cemetery in Rio.